Gates of Vienna has no doubt that there’s a war on, and what the nature of it is.

Cindy Sheehan doesn’t think there’s any war on except the one that the racist tyrant Bush caused when he invaded Iraq.

But the Danes know there’s a war on. It arrived at their doorstep last winter, after one of their newspapers published some cartoons. The latest skirmish took place in Odense yesterday, when a group of terror suspects was arrested, most of whom were Danish citizens, though not “of Danish background”.

Seven men faced preliminary charges of plotting a terror attack in Denmark on Tuesday, while two others arrested in pre-dawn raids were released.

Investigators said they launched the pre-emptive raids early Tuesday after having the group under surveillance for some time, though they said they weren’t sure what stage of planning the suspects were in.

And what kind of plotters were they? The AP is coy:

Officials said the nine suspects arrested were Danish citizens between the ages of 18 and 33. Findsen said eight had immigrant backgrounds but didn’t specify from what countries.

This is standard operating procedure for the MSM. If you read the details in different versions of the story, you’ll find quotes from family members of the detained men, family members whose first names just happen to be Ali or Mohammed. It’ll make you suspect that the alleged terrorists weren’t just off the boat from Finland or Estonia.

The Danish newspapers aren’t so shy. According to Jyllands-Posten:

All of those arrested are of Islamic background and under 30 years old. The men will face a preliminary hearing sometime today.

Minister of Justice, Lene Espersen, describes the terror case in Odense as the most serious case of a terror threat in Denmark directed at the country in recent times.

“It is probably one of the most serious things which have happened in Denmark ever,” Lene Espesen said.

PET, the Police Intelligence Service, took action last night against a number of addresses in the Odense suburb Vollsmose.

Nine persons were arrested, all of them young men under the age of 30. The majority of them are Danish citizens.

“The majority of the arrested persons are Danish citizens, and this is to me the most important challenge. These are people who are Danish citizens and who were apparently planning a terror action in this country,” Lene Espersen told the news agency Ritzau.

All we can do is hope that the Danish judicial process isn’t as protracted and procedurally sandbagged as it is in the U.S. 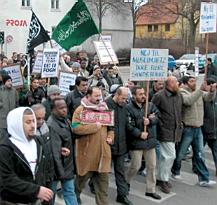 Presumably this case will give Danish prosecutors the same kind of heartburn that Zacarias Moussaoui and Jose Padilla caused their American counterparts. However, as has been noted here frequently, the Danes have recently shown every sign of getting tough on Islamist-related terror and criminality, especially when you compare Denmark with its European neighbors.

The big question is whether these newly-arrested conspirators were involved in some of the other recent plots that have come to light in Europe. The authorities seem to go out of their way to discount such connections:

Authorities said the suspects had been under surveillance for some time. But Findsen said the sweep was not related to neighbouring Germany’s arrest of four Lebanese suspected of involvement in a failed attempt to bomb trains.

Yet one of the Muslim suspects recently arrested in Germany after the failed train-bombing plot was headed for Denmark, and had Danish Imam Abu Bashar’s phone number in his pocket. Abu Bashar, you may remember, is the fellow who took the Mohammed cartoons (both the real ones and the fakes) on a Middle Eastern tour to gin up the requisite amount of Muslim outrage.

And Abu Bashar, not surprisingly, loudly proclaims his non-involvement. According to ABC (Australia), Abu Bashar said this:

Osama Bin Laden, he give message to Denmark and Italy and London and Spain. Bin Laden do something before, some years ago, in Madrid, and last year in London. I cannot say I am sure, but I am afraid that Bin Laden’s sent somebody to do something against Denmark.

Oh, yes, I’m certain that Abu Bashar hasn’t the faintest inkling of what Osama bin Laden’s minions are doing in Denmark. If indeed such people exist. How could he know? He has nothing to do with people like that.

And, as the AP reminds us, there’s the possible Bosnian connection:

Two weeks ago, four suspects in custody in Denmark since October were charged with supplying explosives to two men arrested in Bosnia for allegedly preparing a terror attack.

Investigators said that group planned to blow up a target in a European country to force the withdrawal of foreign troops from Afghanistan and Iraq.

Police didn’t say whether the new arrests were related to that case.

We have every reason to be skeptical about all these breathless assurances. But we also would do well to remember the possible reasons for all those Mandatory No-Terror Disclaimers. It’s possible that our intelligence and law-enforcement officials are stupid, or incompetent, or in the pay of CAIR, or afraid for their careers if they don’t utter the politically correct platitudes required by their superiors.

But there may be other reasons.

Shrinkwrapped has been running an excellent series of articles by Owen, a retired intelligence analyst. Owen’s account of the current war is too extensive and detailed to summarize here; go to Part One and start working your way forward (he was up to Part Five the last time I looked).

Owen places special emphasis on Information Warfare (IW), which is an important part, probably the most important part of this conflict. The enemy is very adept at it, playing our news media like violins, faking photos and news stories, engaging sympathetic Western liberals to regurgitate their propaganda in the newspapers and on television.

But Owen wants us to remember that our side is engaging in IW at the same time. Because our society is so open, so divided on these issues, and so riddled with enemy sympathizers, our IW efforts have to be more subtle. We must practice the carefully refined feint, the art of dissimulation, the skill of keeping a poker face. Above all, we can’t always reveal everything that we know.

IW as practiced by Al Qaeda, Hizbullah, Ahmadinejad, etc., is a version of honor-based Islamic tribal practice, and consists mainly of bragging, bluster, bullying, threats, and lying. It can be very effective, but it’s about as subtle as a shark attack.

One assumes that George Bush doesn’t mind if he looks ignorant. It doesn’t cause him shame, or do damage to his family’s honor, if he looks foolish on TV. And, if it served our country’s purposes in this war, I’m certain that he would gladly do it deliberately.

Call it taqiyya, Western-style. “Shucks, I don’t know nothin’ about no Muslims.”

Let’s reconsider all the incidents we’ve read about that are invariably followed by the Mandatory No-Terror Disclaimer:

I’m sure there are many other examples that I’ve neglected to list.

Do you see a pattern here?

If you were to take all this at face value, you’d have to assume that our counter-terror authorities are as dumb as a bag of hair.

I prefer not to believe that. I think there’s a good reason for them to let everyone think they don’t know all the connections amongst all the different mujahideen operating in the Western world and beyond.

I think some of those poor innocent “detainees” locked up in various undisclosed locations are singing like turtledoves in exchange for an extra ration of falafel or a softer prayer rug.

If I were in charge of such operations, I wouldn’t want the friends of these stool pigeons to know this fact. And I wouldn’t mind looking like a fool if it helped my plan along.

This counter-taqiyya operation is just a hypothesis on my part, but I prefer to believe it. While the lefties are screeching about Chimpie McBushitler and Halliburton, while the media count the bodies of our soldiers and weep over all those poor dead Lebanese children, while we conservatives argue and bicker about what a bad job our government is doing in the war against Islamofascism, the other part of the war is going on quietly in the background.

The New York Times will expose any pieces of it that it can find. The Democrats and the media will do their best to undermine it when they learn about it.

But while all this bluster and brouhaha is going on, dedicated and unrecognized people are working unnoticed on your behalf to try to make sure that things are not what they seem.