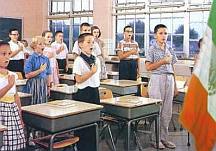 September 16th was Mexico’s independence day, so principal Sam Williams of Velasco Elementary School in Clute, Texas had a good idea. Last Friday he brought in some Mexican parents to help, handed out Mexican flags to the kids, and had the pledge of allegiance to the flag recited in class. Unfortunately, it was a pledge to the Mexican flag.

Mr. Williams didn’t realize there was a problem until an Anglo parent called into local talk radio (go to Hot Air for the audio from Chris Baker’s talk radio show) to complain about what happened. That lit a fire under Mr. Williams’ asparagus, and now he’s feeling a little sorry for himself.

Though there could be some of Uncle Sugar’s dollars involved — it might be a new federal program, after all, one in which no child is left behind saying Prometo lealtad a la bandera…