Those of you who hung around over the weekend know that we covered the Swedish elections, and that the Social Democrats lost. Because our ISP was down, I couldn’t include any graphics to go with the stories, so I’ll make up for it now. 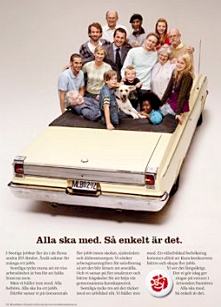 The Social Democrats’ slogan was Alla ska med. Så enkelt är det. It means “Everybody must come along. It is that easy.” (Some readers prefer to translate Så enkelt as “that simple”).

The image at right is one of a series of full-page ads taken out by the Social Democrats during the election campaign. The car is full of everyone who must come along, and you’ll notice that it’s basically a car full of Swedes — pardon me, I mean “persons of Swedish background” — with the exception of one fellow towards the back, who looks like he might be one of those nice immigrant chaps.

Swedish correspondent LN has made us aware of the disparity between the Social Democrats’ fantasy of Sweden and life in Sweden as it really is. One of the images he sent me was an alternative and more realistic version of what Alla ska med means: 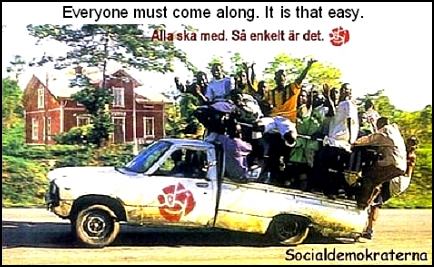 It’s too early to say whether yesterday’s election results represent a watershed in Swedish history. We’ll keep an eye on the situation.

On the same topic, this morning Fjordman sent us a link and a snip from the Swedish English-language news site The Local:

The end of Sweden’s one-party state

The defeat of the Social Democrats could turn Sweden into a normal democracy, where it is common for power to change hands, argues Nima Sanandaji of Swedish think-tank Captus.

Government agencies are often headed by those loyal to the Social Democratic Party. Each year the various agencies spend in total over 2 billion Swedish kronor on forming public opinion and it can be argued that this often occurs from a clear ideological Social Democratic viewpoint.

These are refreshing words, especially coming from the Swedes themselves. We can only hope that one-party rule is finally coming to an end.