We’ve been hearing a lot about the Shebaa Farms lately. This little piece of real estate is Hizbullah’s justification for opposing an Israeli “occupation” of Lebanese territory, and for continued violence against the state of Israel.

Shebaa Farms… It makes one think of a bucolic but tragic scene, where Lebanese farmers, plowmen, and shepherds labor under the oppressive yoke of Israeli domination.

The Shebaa farms are in a little salient of Syrian territory, located near the point where Israel, Syria, and Lebanon come together. It’s part of the Golan Heights, a strategic section of mountainous Syrian territory captured by Israel in the Six-Day War and held ever since, awaiting a permanent peace treaty with Syria for disposition.

Like the rest of the Golan Heights, the Shebaa area is important from a military standpoint for its elevation, and Hizbullah would love to drive the Israelis out and occupy it. But it’s not part of Lebanon, and never has been. 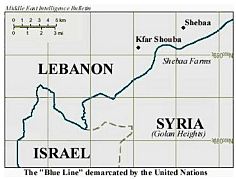 As with so many map features in the Middle East, it was created in 1923 when Ottoman territories acquired at the end of the Great War were divided between Britain and France. Syria and Lebanon were carved out and given a French Mandate, while Palestine, Trans-Jordan, and Iraq were handed over to the British. Boundaries were drawn rather arbitrarily and without much regard for local political and ethnic affiliations, so that the distinction between Syria and Lebanon was a convention imposed by the occupying powers.

But the boundary has been internationally recognized ever since, and the Shebaa Farms, for all their Lebanese affiliations, have always been a part of Syria. Lebanon never petitioned Syria, the League of Nations, or the United Nations for the “return” of the area. After 1967, while Israel occupied the Golan, there was no call from Lebanon for the Israelis to return the Shebaa Farms. And after 1976, when Lebanon effectively became a Syrian vassal, and even after the Israeli occupation of South Lebanon in the 1980s, the issue was of no importance.

Until the year 2000, that is. That’s when Israel withdrew fully from South Lebanon in accord with UN resolutions. The UN certified that the Israelis had fully complied with their obligations, and suddenly there was no more justification for referring to an Israeli “occupation” of Lebanon. But by that time the “occupation” was the entire rationale for Syria’s proxy, Hizbullah, and the basis for the group’s terrorist aggression.

In a flash the Shebaa Farms became an integral part of the Lebanese Fatherland, the territory yanked from the embrace of its fellow countrymen by the cruel actions of the Zionists. I’ll let the Middle East Intelligence Bulletin take up the story:

[Middle East envoy, Terje] Roed-Larsen was told that, in addition to the areas occupied in 1978, Israeli forces seized a piece of Lebanese territory during the 1967 Six Day War called the Shebaa Farms, a 25 square kilometer area consisting of 14 farms located south of Shebaa, a Lebanese village on the western slopes of Mount Hermon. Since Lebanon was not a participant in the Six Day War, UN representatives were understandably skeptical, pointing out that the 1923 Anglo-French demarcation and the 1949 Armistice line clearly designated the area as Syrian territory.

However, Lebanese officials insisted that Syria had officially given the territory to Lebanon in 1951 (why such a “gift” would have been made was never plausibly explained). According to the Lebanese claim, there are no international records of the boundary adjustment since Lebanese and Syrian officials decided not to register it with the UN (why such a decision would have been made has also not been explained). In fact, the officials in Beirut were unable to produce any documents concerning the transfer. One senior government source in Beirut later explained that this was because the border adjustment was “a kind of oral agreement” between the two countries and “nothing was documented specifically.”

Lebanese officials pointed to the fact that a number of residents in the area have land deeds stamped by the Lebanese government, but UN officials remained unimpressed. It is not difficult to see why. A Lebanese newspaper described the land deed of one Shebaa resident as “handwritten and signed on a yellowing piece of paper in pencil and ink.” Moreover, nearly all of the deeds date back to the 1940’s, before the alleged transfer agreement was signed, so they do not attest to Lebanese sovereignty over the area (it is quite common for Lebanese to own land in Syria and vice versa).

Both military and civilian Lebanese maps produced after 1951 locate the Shebaa Farms on the Syrian side of the border. Lebanese army maps published in 1961 and 1966 specifically pinpoint several of the Shebaa Farms, including Zebdine, Fashkoul, Mougr Shebaa and Ramta, all of which are designated as being located inside Syria. Lebanese Ministry of Tourism maps also show the Lebanese-Syrian border running west of the Shebaa Farms. Timur Goksel, a spokesman for the United Nations Interim Force in Lebanon (UNIFIL) told the BBC that “on all maps the UN has been able to find, the farms are seen on the Syrian side [of the border].”

On May 22, UN Secretary-General Kofi Annan gently rebuffed the Syrian/Lebanese claim in his report to the UN Security Council and recommended that the line separating the areas of operation of UNFIL and the UN Disengagement Observer Force (UNDOF) in the Golan Heights (which would exclude the Shebaa Farms) be used for the purposes of determining Israel’s compliance with Resolution 425.

So not even ol’ Kofi was willing to grant the farms to Hizbullah. Must be a pretty flimsy case, right?

Unfortunately, the constant repetition of the “occupation” mantra, amplified by the compliant mainstream media, has given the Shebaa Farms cause a cachet that it would not otherwise have. There are even rumors that — under the weak and vacillating leadership of Ehud Olmert — Israel might concede the area to Lebanon under a “comprehensive peace settlement”. 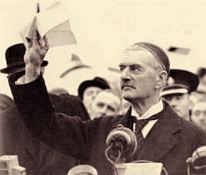 Such a deal would be a repeat of Munich in 1938, with the rocky uplands of the Golan standing in for the Sudetenland. Only a historically illiterate fool would believe that Hizbullah will be satisfied by the “return” of the Shebaa Farms, and afterwards cease their demands and their violence.

In fact, the next demand is already lined up and waiting to be rolled out. I refer, of course, to the “seven villages”, the Shia hamlets which had been part of the Palestinian Mandate since its inception, and afterwards became part of Israel. In 1949 the Muslim inhabitants of the villages fled to Lebanon to become the perpetual charges of UNRA, and Hizbullah insists, without any justification or precedent, that those villages must belong to Lebanon.

Unloading the Shebaa Farms will not give Israel even a moment’s peace. It will only display the weakness of the Jewish state and whet its enemies’ appetite for more concessions.

The “seven villages” will be the equivalent of the rump of Czechoslovakia. If they’re conceded, the Führer of Hizbullah, Sheikh Sayyed Hassan Nasrallah, will soon be chewing the carpet with his next series of demands.

Israel needs to learn this lesson and draw the line now, before it finds itself standing on the beach at Tel Aviv with its back to the Mediterranean.

The Shebaa Farms territory, like everything else, has a website. It’s called the Shebaa Farms Foundation. It’s mostly an empty shell, although the “Donate” page is up and running, and it does have this mission statement under “Brief History”:

Our objective is to present the Facts which lead to UN Mediation, and land Liberation.

However, Lebanese and Syrian officials insisted that Syria had officially given the territory to Lebanon in 1951. Lebanese officials pointed to the fact that a number of residents in the area have land deeds stamped by the Lebanese government.

Lebanese army maps published in 1961 and 1966 specifically pinpoint several of the Shebaa Farms, including Zebdine, Fashkoul, Mougr Shebaa and Ramta, all of which are designated as being lebanese [sic]. Lebanese Ministry of Tourism maps also show the Lebanese-Syrian border running west of the Shebaa Farms. Syria has officially acknowledged the Farms are Lebanese.

Syrian President Bashar al-Assad said the Israeli-occupied Shebaa Farms belong to Lebanon. Assad told a news conference in Paris before ending a state visit to France, Beirut and Damascus will demarcate their countries’ border at Shebaa Farms after Israel withdraws from the region. They will then submit a new map to the UN.

The Lebanese Resistance has vowed to keep up resistance operations in the area until Israel withdraws.

A little bit different from MEIB’s version, isn’t it?

Note the part of the text in bold, and compare it to the bold part of the MEIB quote earlier in this post. They are word-for-word the same, except that “located inside Syria” has been changed to “lebanese”. Even the statement that the border passes west of the Shebaa Farms has been left in, so that the whole makes no sense whatsoever.

I was curious about the Shebaa Farms Foundation, so I took a leaf from CP’s investigative handbook and started prowling through information which is publicly available on the web.

First I did a Whois lookup on the domain name, which gave me the following data:

The admin name for the site is “Hatem Khreis” at the same address and email. A Google search on his name turns up almost nothing; besides the Whois listing there is only this brief listing in the Lebanese White Pages:

LebaneseNet.com is even more of a shell than the Shebaa Farms site; it is basically a DirectNIC holding with a list of links.

However, searching on the mailing address given for shebaafarms.org leads us to an interesting website: Middle East News & World Report. Here’s the “urgent news” from their main page:

Well, I guess we know where they stand, don’t we?

The connection with the Shebaa Farms address is not obvious; you have to work your way to the “Advertising Contracts” page to find it: Post Office Box 1456, Glendale, CA. 91209-1456. Apparently it was necessary to post it so that people can send them money.

Then on the “Advertising Rates” page I found “Rami S. Khreis” listed as editor. A relative of Hatem? Or a coincidence?

Since there’s a link there to the Shebaa Farms site, my guess is that the latter is a spinoff operation of Middle East News & World Report, set up to highlight Hizbullah’s interest in the newly proclaimed Lebanon Irredenta of the Golan Heights.

The “©2001” at the bottom of the Shebaa Farms page confirms that hypothesis. Israel withdraws from Lebanon, and the Shebaa Farms suddenly assume an overwhelming importance. Up goes the website! And then the money starts to flow in.

It seems to me that this is just another channel for “charitable” donations to Hizbullah.

Some of you dedicated sleuths out there might want to dig into this a little further. If you turn over enough rocks, there’s no telling what you might find.

8 thoughts on “Old Nasrallah Had a Farm”