Gateway Pundit has a wonderfully revealing post on the fauxtography coming out of Lebanon. The dying scene, which occurs in two of his photos, is worthy of Shakespeare. 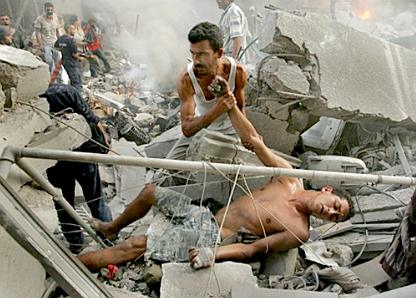 A set-up scene is worth a thousand earnest essays on poor Lebanon. In fact, this here particular picture is priceless, especially if you go over to Gateway Pundit and look at the whole series. For a dead guy, he sure is a busy little bee.

Note the hat squashed between his arm and body. He obviously had to stick it there quickly for the post-mortem pose, but you’ll see him wearing it in other photos as he scrambles here and there.

Cause of death? A terminal case of taqiyya.

10 thoughts on “Have You Ever Seen a Dead Man Sweat?”