UPI has a story that it says is making the rounds on the internet. So let us by all means join the chorus: 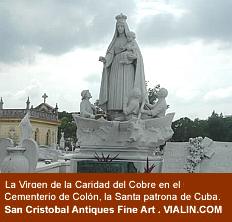 According to this MSM version, a Spanish priest who had come to Cuba in the 1850’s to serve, and who eventually was to become the Archbishop of Santiago, had a strange vision in which La Virgen de la Caridad del Cobre told him that someday Cuba would be overtaken by a leader with long hair and a beard. He would wear a uniform and would be accompanied by similar followers. He would betray his people and for forty years they would suffer under his rule.

In this legend, it is also reported that the vision occurred while the priest was riding his horse through Sierra Maestra, the mountain stronghold which would one day serve as Castro’s starting place.

The Virgin promised that eventually the young man would grow old and die and Cuba would again be free.

However, there are other legends about Cuba’s patron saint. Here is another:

The pretty mulatta with dangling earrings and golden robe is Cuba’s patron saint, and she is found in every chapter of the island’s history.

“Without the Virgin, we Cubans are nothing,’’ said Ariel Abreu, 40, a guide who brings tourists to the small cream-colored shrine housing the statue of the Virgin in this mining town outside Santiago.

“She is for all Cubans because she does not recognize political ideology,’’ said Abreu. “You can be a communist or even an exile in Miami and she won’t care,’’ he added.

Legend has it that the statue was discovered in 1682 in the Bay of Nipe near Santiago by two mulatto brothers and a black boy of about 10.

Struggling in a storm-tossed boat, they heard a voice declare, “I am the Virgin of Charity.’’ Across the waves they spied a wooden board carrying the statue.

In her left arm, she carried a mulatto baby Jesus. In her right hand, she held a cross with precious stones.

For centuries, huge celebrations on the Virgin’s Sept. 8 feast day lasted for up to two weeks.

During the independence wars of the late 1800s, she became a patriotic figure, dubbed the “Mambisa Virgin’’ by the freedom fighters known as “Mambis.’’

Practitioners of Cuban-African faiths associated her with Ochun, a deity of maternal love and the sea.

Shortly after the 1959 revolution, even Castro reportedly wore a medallion engraved with the Virgin, given to him by a little girl. He stopped wearing it after his government became increasingly Marxist, and finally atheist.

Still, a letter written by his mother, Lina Ruz, giving thanks for protecting her son in the mountains, was displayed in the shrine for many years. It was later removed for safekeeping.

As the days go on and Castro, like Franco before him, becomes more and more dead, no doubt we will hear other stories of Cuba’s patron saint. La Virgen de la Caridad del Cobre wouldn’t be a patron if she didn’t have the accretions of many, many compelling legends.

And if you reduce them to mere ethnology or primitive, pre-rationalist belief systems, then you are all the poorer for your unassailable orthodoxies.

Oops! It was The Brothers Judd who linked to the UPI article. Oh well, drop by Bill’s too…for other reasons.