Earlier this week, I posted about the sneak attack on Jeff Goldstein. From out of the blue he was assaulted by deadly falafel balls and then his assailants escaped on Vespas before he was able to retaliate.

The incident got me to thinking: what would be the perfect response? After pondering it a bit, I came up with what I deemed the perfect (and thereby disproportionate) response retaliation for this small battle in the Long War.

What I had in mind was hitting them with some Texas-style barbeque sauce on pulled pork. I should have said parenthetically that this was mixing cuisines since pulled pork is mostly North Carolina and Tennessee. But I needed the pork for my retaliation, and I needed that goopy, viscous Texas sauce, too. So I combined ’em.

Big mistake. Texans came out of the woodwork to remind me that there ain’t no such thing as “Texas pulled pork”. I hate it when people spoil a good story by insisting on verisimilitude. So I wrote an update to the post, which the Baron liked so much that now I’m doing this uber-update, which pushes further up the page my response to those who wrinkled their nose at the idea of my saucy dish.

You might want to go to the link above to see Jeff Goldstein’s original story and my response. Then, what follows below is a copy of my flailing response to those Texans. Just consider it a coda to the first flights of fanciful revenge.

And if that’s clear, you’re a genius.

By the way, do you think anyone will ever google “Texas Pulled Pork Bab-b-q”? Sure would beat all those searches we get for “make a b0m” — mostly from abroad, by the way. Not too many b*mb-builders here. Or at least they don’t use Google for advice.

UPDATE: A reminder for all of y’all nit-pickin’ Texas commenters and e-mailers out there:

Satire doesn’t have to be accurate, just amusing. Yes, I know Texas “don’t pull pork”; y’all tend to be beef people, anyways. However, my dilemma was that pulled pork usually has thin North Carolina sauce, which, while very good, is not viscous enough to really gum up the works of the fleeing Vespas.

When faced with a choice of humor over reality, I always choose the former. Fortunately, there are enough non-Texans out there who wouldn’t notice my sleight of hand…or wouldn’t have if you guys hadn’t had to tromp onstage in your boots and stop the story in the name of accuracy… 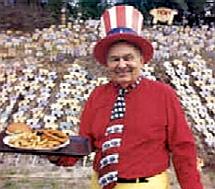 A pox on reality. Do you *really* think Mr. Goldstein was attacked with great balls of falafel? Of course not. For my purposes, this particular batch of pulled pork with its viscous Texas-style sauce continues to slop around in its tin tub aboard the helicopter — which is chasing the Vespas, who now realize that Fate is about to descend upon them in the form of a haram End to It All.

Oh, wait a minute! it’s not a helicopter carrying the tub, it’s flying pigs. Yes, that’s it: Texas pulled pork barbeque sloshes in a galvanized tin tub, which is being carried aloft by Mighty Flying Pigs. I can see it now, as they inexorably catch up to the Vespas, the latter desperately putt-putting down the dirt road while bits of rust fly off, making the Vespas lighter with each mile. Suddenly, from on high, …SPLOPPP!!![followed by a tin tub bonging into the underbrush like a broken liberty bell, while the feathery swish of flapping swine wings recede, and garbled Arabic cursing rises in the background]. Blue-helmeted guys with large towels — *Turkish* terrycloth towels, mind you — and Vespa repair manuals saunter in, stage left…

meanwhile, stage right, enter annoyed Texans in big boots who proceed to stomping on the sauce.

Everybody’s got their priorities.