The indefatigable Zonka has translated another Danish newspaper article. His comments are in italics, followed by the text of the article.

Below is a translation from today’s edition of Jyllands-Posten. A few background notes — Per Stig Møller, the conservative foreign minister, has traditionally been in the multi-cultural camp, which has put him at odds with the national-liberals (the faction the Prime Minister Anders Fogh Rasmussen, belongs to) at times, and he has been overruled on several occasions by the PM. As such he is showing progress in coming out with this analysis of the situation; however, his suggested solution — dialogue, dialogue, dialogue — is the same old song, that has been tried for so long without success, since no dialogue has yet come up with anything but concessions to Islam! 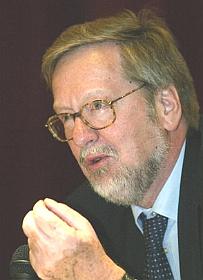 The fanatic Islamists are just as totalitarian in their way of thinking as the Communists and the Nazis, the foreign minister believes.

Fanatic Islamism is a totalitarian movement, which should be taken dead serious, warns the Danish foreign minister, Per Stig Møller (Conservative):

“I have noted, that some are saying that it only a minority of extremists, who don’t have the same power that the Nazis and the Communists had in their time, however, that is taking the threat too lightly. Communism started with a few loons playing chess in Zürich, and the Nazis were a bunch of jerks in the beer halls of Munich. One must never underestimate a totalitarian movement in the making,” says the foreign minister.

He sees several similarities among the three totalitarian ideologies:

“Islamism wants to create an orthodox society based on the Qu’ran, corresponding to the communist ideology of a classless society and the dictatorship of the proletariat, and the Nazi ideology or an Aryan society based on biology.”

“The fanatic Islamists are just as totalitarian in their way of thinking. Which can be seen in Afghanistan during the Taliban and other places where they are in power. Then everybody is forced to live in unification and books, movies and music is banned,” says Per Stig Møller.

He adds that the totalitarian forces in the Islamic world also were a major reason for the escalation of the Mohammed crisis in January and February.

“The fanatics have tested how far they could push us. Naturally they will cynically use all issues they can find to inflame their populations. But it is important to emphasize that they are a minority. The best thing we can do is to support the forces of reformation. The Mohammed Cartoon case has demonstrated that they are as strong as we could have wanted, but surveys show that there is a majority for reforms in the muslim world,” says the Danish foreign minister and emphasizes that we need to be on speaking terms with as many interested parties as possible — including the moderate Islamists:

“The limit is drawn at those who wants to change our society with violent means. Everything else is dialogue,” says Per Stig Møller.

A look at history ought to give us extra motivation to seek a peaceful co-existence with the Islamic world. It has historically always been the culture, which had the largest population growth that expanded and right now the European populations are receding, he states.

But peaceful co-existence doesn’t mean that we should limit the freedom of speech to avoid offending religious feelings.

“Europe’s spiritual development is built upon freedom of speech. Just because somebody believes that the freedom is being misused to criticize and make fun of their religion doesn’t mean we should change that,” states the Danish foreign minister.