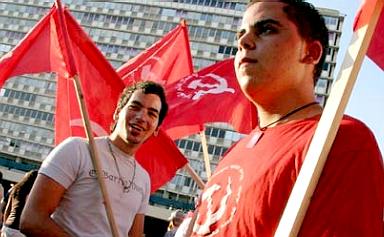 The above photo is not from Berkeley or Brussels.

It’s from Tel Aviv, where an alliance of useful idiots and Arabs protested Israel’s war in Lebanon.

Thousands of left-wing activists, including many Arab citizens, marched Saturday evening from the Rabin Square to the Cinematheque plaza in Tel Aviv in protest of the fighting in Lebanon. The protestors held up signs with slogans against the war and called for an immediate ceasefire.

According to the demonstrators, a prisoner exchange deal with Hizbullah must be struck, as well as a similar deal with Hamas. Marchers also urged IDF soldiers not to take part in the Lebanon operation, chanting: “Listen up, soldier – it’s your duty to refuse.” Other slogans recited by the participants were: “The occupation is a disaster, leave Lebanon now,” “Olmert and Bush have struck a deal – to carry on with the occupation,” and “Children in Beirut and Haifa want to go on living.”

Words fail me. Dymphna and I were talking about “suicide Jews” this morning, but we meant the ones in America who embrace the anti-Zionist Left.

It looks like there are plenty of them in Israel, too.