Daniel Katz, the Editor-in-Chief of Middle-East-Info.org, has emailed us a few times requesting an exchange of links. Last night I finally got around to looking at his site, and I’m definitely going to put an icon for MEI on our sidebar.

The first thing that caught my eye was the introductory Flash animation, which features comparative statistics for Israel and the Arab countries plus Iran. The numbers are instructive: 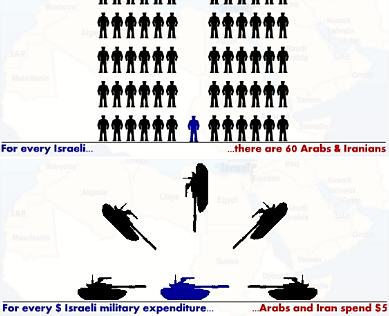 In addition to the statistics shown above, the introduction informs us that the Arab countries and Iran have 750 times as much land area as Israel, 14.6 times the GDP, and two-thirds of the world’s oil reserves.

One comes away with the impression, and rightfully so, of a tiny beleaguered state of Israel surrounded by an implacable and much larger enemy.

But look what else is hidden in the statistics: The Israeli economy is almost 52 times as productive as that of the Arabs, based on land area. Given that — like their Arab cousins — the Israelis were bequeathed a chunk of rocky desert, but minus the oil, this figure is very impressive.

Also, on a per-capita basis, the Israelis are more than four times as productive as their Arab and Iranian neighbors. If oil were withdrawn from the calculation, how much higher do you think the figure would be?

Yet Israel spends twelve times as much per capita on its defense as do its neighbors — not surprising, given that some of those same neighbors are on the public record as intending to wipe Israel off the map.

And those are just the economic statistics. The less quantifiable comparisons are even more important: cultural vitality versus repressive backwardness, innovation versus stagnation, vibrant democracy versus ruthless autocracy, liberty versus subjugation — the list goes on and on.

As the MEI introductory page says:

The case for Israel should be apparent even to thoroughgoing supporters of the Palestinians. Who else has offered them a genuine future? Egypt? Jordan? Syria? Lebanon? The Gulf States? It takes only a cursory glance at the history of the Middle East to realize that for the most part, neighboring dictatorships have ruthlessly exploited the Palestinians for their own ends with callous indifference to the consequences. Israel, alone in the Middle East, has attempted to construct, with and for the Palestinians, a viable and peaceful future.

Fundamentally, Israel is the target of these terrorist organizations and despotic regimes precisely because of its virtues:

There’s a wealth of material at Middle-East-Info.org; readers are advised to stop by and check it out. The site has a clickable map which leads to detailed information on each country.

But a warning is in order: if you are sensitive to brutal images, or have children with you watching your screen, you may not want to click through all the links, since MEI has not spared its readers the full range of visual truth to be found in the region’s Islamic countries. Arab brutality is so commonplace that mentioning it is almost banal, but its images are not. Prepare to be shocked.