Israel’s Prime Minister addressed the Knesset today about the situation in Lebanon and beyond. The Washington Times reports: 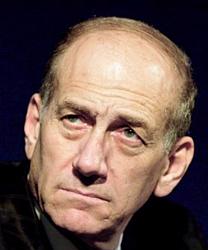 “There are moments in the life of any nation where it stares reality in the face and says ‘enough,’ “ said Mr. Olmert in his first address to parliament since the fighting began. “So I say to everyone: ‘Enough.’ Israel will not be held hostage to a terrorist gang, nor a terrorist authority.”

The prime minister said he would operate with “all the force” against Hezbollah, an Islamist militant group based in Lebanon, and Hamas, which is holding an Israeli soldier captive in the Gaza Strip. He described the groups as “subcontractors” for an Iranian-Syrian “axis of evil” that exports state-sponsored terrorism.

In the last day or two some commentators, perhaps impatient with the measured pace of unfolding events, have expressed doubt that Israel is willing to go the distance in this war. In particular, they wondered if it would balk at a ground assault into Lebanon.

The Prime Minister’s speech indicates otherwise. “All the force” can only mean the dirty and dangerous task of hunting Hizbullah terrorists down and pulling them out of all their rabbit holes in South Lebanon.

The strategic logic for the ground assault requires major operations in the Bekaa Valley, Hizbullah’s stronghold and armory. In order to neutralize the Bekaa, the terrorists’ supply routes and logistical support from Syria must be interdicted. Wretchard and Chester agree that this may make an Israeli attack on Syrian territory necessary. Bashar Assad, if he is truly dedicated to sitting this one out, might pull all his assets back from the border and ignore what’s going on. But, since saving face is of utmost political importance in the Arab world, he might not.

Then we have this interesting tidbit from YNet (hat tip: Carl in Jerusalem):

Al-Sharq al-Awsat reported that a European country warned Iran that Israel is ready for a confrontation with Syria, which recently signed a defense alliance with Iran.

The alliance stipulates that Iran would send arms and troops to back Syria should Damascus be attacked.

Iran was also warned that Israel is determined to crush Hizbullah’s infrastructure and liquidate its leadership.

The report, which was based on leaks by an Iranian presidential aide, said Iran is worried by criticism waged against Hizbullah by an array of Lebanese politicians like Prime Minister Fouad Siniora, Druze leader Walid Jumblatt and Saad Hariri, son of slain former prime minister Rafik Hariri.

Interestingly enough, this seems to be a fight the Arabs want to keep inside the family: Carl reports that Al-Sharq left this story out of their English-language version.

Just to make the situation even more interesting, Spook86 points out that the infidel tourists currently being evacuated by sea from Lebanon may prove to be an irresistible target for Hizbullah’s artillery on the Lebanese coast. Especially the Americans — how could any dedicated mujahid forego the opportunity of blowing up a boatload of Americans?

One big question is whether there truly exists a chain of command running from Tehran through Damascus and the Bekaa to the Hizbullah units on the front lines. Iran and Syria are Hizbullah’s patrons, but do the terrorists really take orders from Damascus and Tehran?

Everything may go smoothly. The Israelis may destroy Hizbullah’s offensive capabilities, hold Syria at bay, and clear a buffer zone in South Lebanon. The UN could broker a cease-fire deal that saves face for everybody, and delegate a multinational force to keep the terrorists away from southern Lebanon. Then the West, with deep-pockets Uncle Sugar leading the way, can shower Lebanon with billions of dollars in development aid to rebuild all the infrastructure destroyed in the war.

It might go that way, but I’m not betting on it just yet.

It’s mid-July, 1914. The Archduke Franz Ferdinand has been buried. Gavrilo Princip is in custody. Austria is mobilizing. The Kaiser rages and seethes. The Serbs are defiant, and Russia seems dangerously oblivious. Everything is up in the air.

What will happen next?