Last night I watched the Google Video version of the documentary “Obsession: Radical Islam’s War Against the West”. It’s a fascinating film, and I recommend it. It lasts more than an hour, so pop some popcorn and settle in to watch the whole thing. Warning: there are occasional graphic video sequences, including footage of the desecration of American corpses in Mogadishu and Fallujah, so viewer discretion is advised.

If you are a regular reader of Gates of Vienna, you won’t learn anything really new from this video. But all the compelling themes are there, drawn together in one neat package. It’s like a “Best of Jihad Watch“ in video format, with graphic accounts of Radical Islam in various trouble spots across the world. There are interviews with familiar faces, including Daniel Pipes and Sir Martin Gilbert.

One of the prominent themes the movie focuses on is the depraved indoctrination of children into the Palestinian death cult. There were numerous clips taken from Palestinian television in which small children — one is three years old — talk excitedly about killing the Jews and becoming martyrs for Allah. In one such example, the little girl shown at right is shouting about martyrdom in what looks like a classroom, under the encouragement of a teacher. 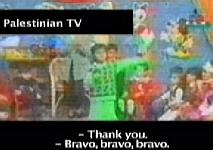 When the camera pulls back from her at the end of her recitation, you can see the grotesquely incongruous cartoon figures of Minnie Mouse and Daisy Duck, among others, on a wall in the background.

I don’t know about you, but that really gives me the creeps — to take the familiar icons of the nurseries of the West and use them as a backdrop for the indoctrination of children into the Islamic suicide-murder cult: Can you think of anything fouler than that?

I assume that Porky and Curious George and the other apes and pigs of the cartoon world were not included in the little jihadists’ school pantheon. But it made me wonder who else may be on that wall…

How about this one?

Rise and shine, kiddies!
Sing along with me:

Let’s get up and make the bed,
Get dressed and tie our shoes!
Eat our groats and brush our teeth
And then go kill the Jews!

Shahada time! Shahada time!
No greater goal have I!
I’ll blow myself to little bits
And make Crusaders die!

Sometimes, when I’m confronted with a reality this horrific, the only way I can deal with it is through humor.

There are not enough millstones on the planet to hang round the necks of these people and cast them into the sea. Of all the abominations in the world, none is worse than the deliberate destruction of children. And, in case of the Palestinians’ idea of education, the destruction of childhood itself.

We’ve grown uncomfortable with moral language. Even if one is religious — which I am — it’s difficult to talk straightforwardly about atrocity. If these people are not evil, then the word “evil” has no meaning. The destruction of children goes beyond mere badness and sociopathy and enters a zone which can only be described with the vocabulary of theology.

I’ve written before about the current confluence of events as a “Demonic Convergence”, and if anything is demonic, “Palestine” surely is. An entire culture, possessed by demons.

Robert Godwin (a.k.a. Gagdad Bob, at One Cosmos) has written frequently about what he calls “mind parasites”. These are self-replicating mental structures passed on from generation to generation by disturbed people to their disturbed children. They are destructive memes, malware of varying virulence that infects the minds of its human hosts and does incalculable damage.

The public culture of the Palestinians is infected collectively with malevolent mind parasites. The infection started decades ago, but greatly accelerated after Oslo in 1993, when the Palestinian propagandists gained unfettered access to television in order to spread their virus. We are now well into the second generation of children reared on this vile mixture.

What happens if “peace” ever comes? What peace can these children ever know, even if by some miracle the gangsters running the Palestinian Authority decide to stop their jihad against the Jews?

A former officer of the Hitler Youth is interviewed for “Obsession”. He describes how difficult it was to overcome the intensive long-term Nazi indoctrination of his childhood. He also gives his opinion that the Palestinian indoctrination of children is much worse, and much more effective, than what was inflicted on him.

Can these children ever be deprogrammed?