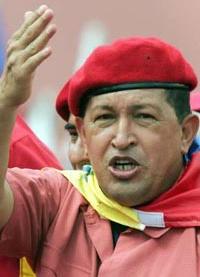 Reader L.A. writes us with the following observations about the Prince of Caracas:

One item that no one mentions, and I don’t know why, is that U.S. refineries are the only ones that are capable of handling the heavy sour crude this nutcase exports.

If the St. Croix and Martinique refineries refused to process the crude he could send it to Europe for processing, at 1/10th the capacity.

I spent 25 years in the gas processing industry and never could figure why Venezuela never built their own processing equipment for their type of crude. Amazing.

And commenter Fluffy reminded us of the following, which was reported early last month in Rigzone (among other places):

A Sudden Plunge In Production?

Is Venezuela’s oil production rapidly waning? One source reports that the world’s fifth largest oil producer is showing signs of a rapid decrease in production, one of the key tenets of the peak oil theory.

According to the Financial Times: “Venezuela, the world’s fifth-largest oil exporter, has struck a $2bn deal to buy about 100,000 barrels a day of crude oil from Russia until the end of the year. Venezuela has been forced to turn to an outside source to avoid defaulting on contracts with “clients” and “third parties” as it faces a shortfall in production, according to a person familiar with the deal. Venezuela could incur penalties if it fails to meet its supply contracts.”

This is further evidence that the magnificent Venezuelan edifice built by Hugo Chávez is an oil-based Potemkin village.

If the price of oil falls significantly, expect Chávez’ mischief to become even more malicious. There is nothing more dangerous than a dictator with a rapidly emptying piggy bank.

7 thoughts on “Venezuelan Crude: An Update”