For the first time ever, Adolf Hitler’s underground hideaway, the infamous Führerbunker, is to be marked with a historical sign.

Construction of the Führerbunker, which was located beneath the garden of the Reichskanzlei (Reichschancellery) in Berlin, was completed in 1939, and the structure remained intact throughout the war.

According to the AP story:

The bunker’s buried ruins lie below a parking lot, playground and adjacent apartment building. The Berlin Underworlds Association unveiled its new marker — a sign bearing graphics, photos and a chronology of events in both German and English — at the edge of a sidewalk alongside the tree-dotted parking lot. 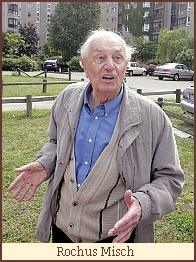 “This is one of the most symbolic places in Berlin for the crimes the Nazis committed, and we want to make sure people know the whole truth about it,” said Sven Felix Kellerhoff, an expert who works with the private group and wrote the book “The Fuehrer Bunker: Hitler’s Last Refuge.”

Former SS Staff Sgt. Rochus Misch, a Hitler bodyguard throughout the war, attended the unveiling and recalled his experiences.

“During the last 12 days of the war, I was down here with Hitler and the other bodyguards all the time,” said Misch, 88, pointing to the place where Hitler killed himself on April 30, 1945, as Soviet troops closed in. 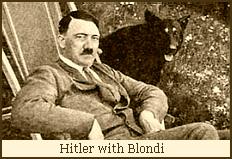 Hitler’s last days at the end of April 1945 were confined to the bunker and the garden above it. During that time he alternated between fatalistic depression and manic raving, ordering counter-attacks by armies that did not exist and screaming at his staff.

After Göring and Himmler abandoned him, and with the Soviets just a few blocks away, Hitler realized that the game was up at last. After testing a cyanide capsule on his favorite dog, Blondi, he retired to his quarters, gave a cyanide capsule to Eva Braun, and then shot himself in the head. 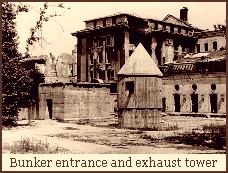 Hearing the shot, Göbbels and the others entered Hitler’s chambers and found him dead. They carried his body and Eva’s up to the garden, doused them with gasoline, and burned them thoroughly, burying the remains.

Göbbels and his wife killed each of their six children with cyanide, and then went up to the garden and ordered the guards to shoot them both in the back of the head. After this had been done, their bodies were also doused with gasoline and set on fire. In this case, however, the corpses were not fully incinerated, and were left lying on the ground in the garden.

The remaining staff and soldiers were left to make their way out of Berlin as best they could, in order to escape the approaching Soviet troops.

As a macabre postscript, when the Russians discovered Göbbels’ half-burned corpse, they took a close-up photo of it to use for propaganda purposes after the war.

But now back to the present:

Berlin officials had been hesitant about pointing out the location because they feared that neo-Nazis could turn the site into a place of pilgrimage.

But Kellerhoff said city guides often stop at the site of the bunker and tell tourists myths about it, and that it was important to make the truth known. One of the incorrect stories claims that the bunker had 12 floors and an underground highway that Hitler used to cruise the city underground.

“That’s all complete nonsense,” said Kellerhoff, explaining that the bunker built in 1935 contained several rooms and was fortified by walls nearly 14 feet thick.

Sgt. Misch does not agree with those who would suppress public recognition of the location of the bunker:

“History can be good or bad, but even if it’s about a devil, people must be informed of history,” he said.

I’m with Sgt. Misch: we all need to be informed of history.

But what about the history of the bunker itself? What happened after 1945?

The story of the Führerbunker is fascinating. Much can be gleaned from the Berlin Underworld site, although only part of the site is in English, and you will have to pick your way through the German part to read about the bunker. There are, however, many fascinating photos. 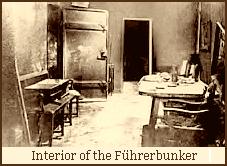 First of all, Soviet troops went through the place, removing everything that could be at all useful (even the commode) and vandalizing what was left. In 1947, just before the Russians blew the bunker up, an East German newspaper reporter descended the steps into the fetid darkness and waded through a foot of oily, scummy water to see what was there. He found trash, broken furniture, missing doors, and graffiti in Russian scrawled across the walls.

And that was it for the Führerbunker. The Russians blew it up and filled in the hole. Many years later, in the 1960s, The East Germans needed a firm fill under the area to build a parking lot, so they partially excavated it to compact the rubble and fill it again, and then paved over the area.

The last time any portion of the Führerbunker saw the light of day was in the 1980s, when the apartments now visible on the site were built. Once again, in order to ensure a compact fill, the forward section of the bunker was excavated, filled, and then covered with dirt.

So now, when you look at those grassy areas, the parking lot, and the apartments, imagine that fifty feet below is the 4.2 meter thick steel reinforced concrete foundation plate, and maybe the stumps of some of the walls. That’s all there is left.

Assuming that Germany somehow staves off the arrival of Eurabia, I expect that in a hundred years or so the Führerbunker will be accorded the same treatment as the McClean House in Appomattox, where General Lee surrendered to General Grant. The site will be carefully excavated to the foundation plate, and then the bunker will be lovingly rebuilt exactly according Speer’s original plans. Period furniture will be brought in or re-created, all the fixtures installed, and audio-animatrons (or holograms) of Hitler and his mistress and his dog will be set in place to entertain tourists.

And if Eurabia comes, the project might start even sooner, with a much more celebratory atmosphere.

When Soviet troops arrived at the garden of the Reichskanzlei in May of 1945, there was a thorough forensic examination of all the remains and the bunker itself. After the war the Soviet Union kept its findings secret because… well, because they were the Soviets and that’s the way they did things.

The Soviet reticence helped fuel all the rumors about Hitler’s purported escape from Berlin and his relocation to Argentina, along with some of the other top Nazis.

But in 1968, for some reason, the Russians released part of their Führerbunker archives to the public. I was in England at the time, and remember reading about them in the (London) Sunday Times Magazine. There were pictures of the bunker and the garden, and photocopies of the autopsies of Hitler and Eva Braun.

One of the strange things in the report was the disclosure that Soviet pathologists had discovered from Hitler’s charred corpse that the late dictator possessed only one testicle, thus proving that all those British enlisted men had somehow known the truth when they sang (to the tune of “Colonel Bogie”):

Hitler has only got one ball!
Göring has two, but they are small,
Himmler has something similar,
And Göbbels has no balls at all!

As I say, this is quite apocryphal. Not only am I going by a 38-year-old memory, it was Soviet information, after all. If anyone has any corroboration or refutation of this little historical factoid, please put in a comment.