In the comments on one of our recent Denmark posts, Charro99 said:

I’ll never forget the Danish tank commander who was sent home from Yugoslavia in the 1990’s by the UN when the UN concluded he was “too aggressive in returning fire”. (I’ll never forget that phrase.) His platoon of white UN tanks was ambushed by Serbs, and the Danes destroyed all of the Serb tanks, suffering no losses on their part. I realized then that Danes were different than most Europeans.

His story piqued my interest, so I did a careful internet search and finally found an account of the plucky Danish tank commander. The incident occurred in Bosnia in 1994, near the town of Tuzla. There is very little information available about it on the web — the few entries I found were on military forums, and seem to be re-posting material taken out of the print copy of a Newsweek story.

There were two separate accounts on a Danish forum, one credited to Newsweek, and the other uncredited; I’ll quote from them both.

It was late at night when the Bosnian Serbs began to shell a United Nations observation post called Tango Two in the Sapna Finger, a Muslim-held salient near Tuzla. Danish Lt. Col. Lars Moller of the Nordic Battalion ordered two platoons of his Leopard tanks to charge to the rescue, which was just what the Serbs expected. As the seven tanks reached the foot of Sugarloaf Mountain, the Serbs opened fire with antitank missiles, artillery and machine guns.

“It was an ambush, and a damn good one,” Colonel Moller said. “Tango Two was the cheese, and we were the mouse. But this time the mouse ate the cat.”

One Danish platoon took cover behind buildings; the other maneuvered to high ground and counterambushed. When it was over, nine Serb soldiers were dead.

The “Nordbat” suffered no casualties. More important, it had done what no other U.N. peacekeepers in Bosnia had done before: strike back at the Serbs with force.

The April 30 battle of the Sapna Finger does not signal a change in U.N. strategy; in fact, U.N. officials in Sarajevo later played down its significance and hinted that Moller’s troops had overreacted.

Don’t you just love the UN? If you shoot back at the enemy, you’re “overreacting.” Things haven’t changed much in the last twelve years.

“Things were getting out of hand,” Moller said. He and [tank commander Maj. Carsten] Rasmussen agreed to hold their fire and ensure that Serb shelling of Tango 2 had ceased. After 30 minutes of quiet, the forward tanks began moving back to Saraci — but the Serbs began attacking them again.

Moller said he “began to get [ticked] off.”

The officers ordered the tanks in Saraci to reopen fire. Continuously. For 15 minutes.

One round plowed into a Serb ammunition dump, igniting a massive, concussive blast. Not since a 1943 battle against the Nazis — and before that an 1864 clash with invading Prussians — had Danish forces been in such a fight, the Danes reckoned.

The trouble had begun when the UN representative allowed the Serbs to move tanks into the area from which they had previously been banned.

Other U.N. officials in Sarajevo tried to cover up the continued presence of 100 Serb soldiers within three kilometers of Gorazde and some heavy weapons within the no-go zone around that city, too, despite NATO’s orders that they withdraw or face airstrikes.

In contrast, the Nordic Battalion, drawing on a long history of peacekeeping work by its Danish, Swedish and Norwegian troops, has showed how a tough stance can work in Bosnia.

No wonder Lt. Col. Moller had to be sent home — the last thing the UN wants is somebody displaying a tough stance.

And Lars Moller does sound like the kind of guy you want watching your back: 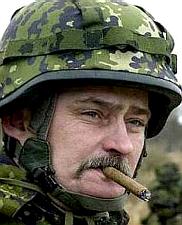 Moller, 40, the battalion’s deputy commander and its top tank officer, is a past karate champion; his father was a Danish Resistance fighter in World War II, and his brother is also a U.N. soldier in Croatia.

He speaks English sprinkled with American slang he picked up on NATO maneuvers, but with an English officer’s accent that seems to match his walking stick. “Turning your cheek is the wrong way down here,” he says. “There’s a lot of macho bulls**t down here and you have to adapt your behavior accordingly.”

“The ambush was bad juju on their part. We are not here to take incoming,” Moller said. “Fortunately for them, we are not here to get involved either. We could have destroyed all of them and been in Zvornik by morning.”

Moller said the Danes spared three Serb T-55 tanks because, while the Leopards’ infrared detectors found the Serbs’ aiming systems turned on, they also determined that the enemy tanks’ barrels were cold. Under the restrictive U.N. rules of engagement, only guns actually caught in act of firing may be hit. [my emphasis]

That’s the way the UN fights a war. No wonder the United States is loath to get sucked into the “peacekeeping” tar baby. A peacekeeping mission always assumes that fighting has stopped, and that new fighting is to be avoided at almost any cost. Even if the UN were not an inherently corrupt and ineffective bureaucratic organization, “peacekeeping” contains a structural imperative that all but guarantees that UN forces will cover up, ignore, and explain away any breaches of the peace.

The Danes experienced a problem that would have been familiar to the US Army Rangers in Somalia:

Although the Serb attacks have grown intense, the U.N. political command in Zagreb, Croatia — directed by special envoy Yasushi Akashi — has rejected at least four of the battalion’s requests for NATO planes to fly close air support for U.N. troops here, Moller said.

Boy, I’ll bet that was good for troop morale…

Most U.N. troops on peacekeeping duty in Bosnia have been neither as aggressive nor as successful as Nordbat. Although last week U.N. commander General Sir Michael Rose praised the tank action during a visit to Copenhagen, many U.N. officials privately have criticized the Scandinavian troops.

It’s obvious that the Nordic Battalion deserved the criticism. An aggressive response defeats the purpose of the UN and goes against its mission statement. When your imperative is to have peace at any price, the aggressor holds the trump card, and must be appeased, rather than defeated.

But Lt. Col. Moller didn’t see it that way:

“The U.N. should not bow its head to any of these people,” he said. “Once you do that, you lose your dignity and, even worse, the other guy will keep walking over you. In the Balkans, you’ve gotta stand tall.”

Fast-forward to February 2006, and reissue these words on behalf of the Danish people in the face of the Mohammed Cartoon Crisis: Denmark should not bow its head to any of these people. Once you do that, you lose your dignity and, even worse, the other guy will keep walking over you.

It’s worth remembering that the Nordic Battalion was defending the Bosnian Muslims back in 1994. Their efforts on behalf of the Prophet’s followers didn’t bank them much credit twelve years later, did it?

14 thoughts on “Breaking the Rules of Engagement”