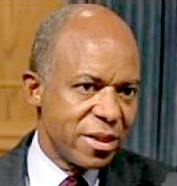 It’s off our mission statement here, but I had to take a look at this morning’s story about Rep. William Jefferson, the Louisiana Democrat who has been accused of taking bribes, and whose congressional office was searched by the FBI.

I suppose I could stretch it to fit Gates of Vienna, since Rep. Jefferson allegedly took bribes from a Muslim official in Nigeria, a country whose northern provinces have instituted the Shari’ah.

But I really just want to look at the sheer American political perversity of it.

As reported in the CNN account, the House Democratic Caucus has voted to suspend Rep. Jefferson from his seat on the House Ways and Means Committee. The full House will have to vote on it now, which should make for some excellent political entertainment.

The usual charge of racism is being thrown around. You would think that its currency had been so debased of late as to be worthless, but people can’t stop themselves from using it.

It seems that all the pandering and affirmative action and prostrating themselves before the likes of Al Sharpton hasn’t gained the Democrats very much. So now even Nancy Pelosi is a racist — she must be wondering how much bang the Democrats are really getting for their pandering buck.

But here are the paragraphs that really caught my eye:

But after the vote, the chairman of the Congressional Black Caucus, Rep. Mel Watt of North Carolina, said the suspension was based on “political expediency” rather than House rules, warning that it “could have consequences” for Democrats among black voters.

“We believe our constituents will import their own interpretation into this, and a number of them will import that there’s a different standard in our caucus based on race,” Watt said, though he added, “None of us are saying that. I’m not saying that.”

He’s right about one thing: There is a different standard based on race.

It’s just not the difference he thinks.

Tom DeLay was hounded into retirement based on negligible evidence compared to that which is on the public record against William Jefferson. But because the man is black, he could be photographed standing on the Capitol steps receiving a laundry basket full of $100 bills from Atiku Abubakar, and any question of the propriety of the transaction would be denounced as “racism”.

Because I’m deluded into thinking that any black politician or celebrity who engages in wrongdoing, no matter how blatant, gets a pocketful of “Get Out of Jail Free” cards because of his race.

I must be a very bigoted person to think such things.

I guess I need a little more Diversity Training.

10 thoughts on “A Different Standard, Indeed”