Commenter Kepiblanc has kindly translated a recent news report from Danish television. It concerns the announcement by a newly-formed network of priests and theologians from the Danish People’s Church:

“Imams are not welcome in the Danish People’s Church,” reads the headline.

One can only imagine what would happen if such a thing happened in America. The MSM would be all over this story like chocolate on New Orleans. 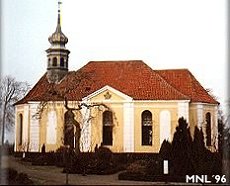 However, Denmark is not America, in a number of important ways. First of all, they have a state church, Folkekirken, which is Denmark’s official evangelical Lutheran denomination. No one has to join, and you can opt out of paying any tax for its upkeep, though if you’re a lazy or indifferent type and don’t phone the local municipality, you will be billed for church maintenance. What’s interesting is that while eighty-four per cent of Danes pay the tax and are official members, only about five per cent of these citizens are actually churchgoers.

In addition to its Evangelical Lutheran communion, Denmark has a few other Protestant denominations, a smattering of Roman Catholics (three percent), an infinitesimal number of Jews (less than one percent), and, in a definite minority, there are about five hundred hardy souls sticking to the old pagan traditions, the ones pre-dating Christianity. But coming up fast, there is now a a census count of about three to five percent Muslims. Anxious, easily offended Muslims.

The Muslim population in Denmark is not Arab, most of them being Kurds, Bosnians, and Turks. A wikipedia article has this to say:

As a country with a highly homogenous indigenous population and without a history of immigration until the last decades of the 20th century, Denmark, like several countries in Western Europe, is dealing for the first time with the presence of a substantial and visible minority. As first and second generation immigrants, many drawn from the ranks of refugees, muslims in Denmark have not yet achieved the economic and political power proportional to their population; for example, they remain over-represented among prison populations and the unemployed, and under-represented in higher education, and among permanent residents holding citizenship and the right to vote.

In other words, Denmark is having a problem with Muslim immigrant crime, joblessness, and failure to go on to higher education. Nor do the immigrants tend to register to vote or become citizens.

So it’s no wonder that this latest pronouncement, this time from the Danish church is not exactly putting out the welcome mat. From DR Yheder, a television news report —

— “imams are not welcome in Danish state churches,” says a new network of Islam-critical priests and theological experts.

The purpose is to state that Christians and Muslims do not believe in the same God, and that the church and the mosque are not religious equals says the new network of 60 priests and theological experts.

Well-known priests and opinion-makers such as Niels Højlund, Sørine Godtfredsen, Edith Thingstrup, Morten Kvist and Katrine Winkel Holm are among the prominent members.

According to the Newfounded Network admitting imams into Danish churches is problematic.

The Danish People’s Church cannot agree with the imams without betraying the Lord Christ — who according to Islam is nothing but an inferior “prophet”, subordinated to Mohammad.

Making fun of the Gospel

When priests and imams are praying together, they are in essence ridiculing the Gospel, the network states. At the same time it distances itself from recent events such as religious councils with imams.

Bishops and imams are not religious colleagues separated only by different merchandise. It is of paramount importance that priests in the Danish Church make that fact very clear — as well as studying and criticizing Islam, says the network — which at the same time underscores that the intention is to criticize Islam, not the individual Muslim.

Is this what Christians would call a “Christian attitude”? In a smaller sense, no. But in the larger sense of putting a stop to the inroads some of the more notorious imams in Denmark have made into a hither-to civilized cultural life, and the economic damage they have caused Denmark by spreading taqiyya in the Middle East, causing boycotts of Danish goods and the destruction of Danish embassies, they are possibly serving a greater good.

The shameful spineless of American mainstream churches in the face of militant Islam, their divestment from tiny, besieged Israel, their unwitting and ignorant support of the spread of Islamicist propaganda in this country, makes Denmark’s line drawn in the sand a refreshing change.

When you consider that:

then you know Denmark is waking up. And you can expect the usual suspects to condemn their action.

When you consider that the frenzy raised by the Danish imams took place in Syria and Lebanon — and not in Turkey, Bosnia, or the Kurdish areas which are the countries of origin for Denmark’s muslims — you know what they did was deeply criminal. And, as the world knows by now, this low-life added his own crude drawings to the originals, illustrations much more inflammatory than anything the Danish cartoonists did.

It would be more heartening if the man were in jail somewhere, serving time for undermining Denmark and causing much economic harm.

Nonetheless, Denmark is stirring. It is not sleepwalking into dhimmitude as some of its neighbors are.

So if the Danish clergy and some of its theologians are making a pre-emptive “NOT WELCOME” signs for the imams in their country, good for them. “Tolerance” in the face of hatred, slander, and deception is suicidal. And the Danes are not suicidal.

Ask the Germans. Ask the Israelis, who honor the Danes for managing to hide, send out of the country, and otherwise keep from the Gestapo all but some 450 Jewish citizens during the German occupation in World War II. Of those who were sent to a concentration camp in occupied Czechoslovakia, some ten percent (mostly the elderly and infirm) died. The rest were liberated after the war. Thanks to pressure by the Danish Red Cross, “their” Danish Jews were given food packages and their whereabouts were monitored. None went to the extermination camps.

There is something about those Danes.

9 thoughts on “There Is Something About the Danes”