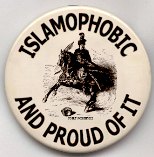 Norm Geras has links to two news stories about a recent anti-Semitic incident in Berlin. This event took place when a group of women heard an Israeli medical student speaking Hebrew into a cell phone as she passed them. The first girl slapped her and the others joined in, leaving off the beating only when they thought the police were coming.

The news stories are essentially the same. Here’s the one from Ynet.

And here is Norm’s take on it.

By the way, the women were Muslims. No surprise there.

Such people convert others to Islamaphobia, one person at a time.