Three Swedish men have been thrown out of Egypt for mocking Islam, it has been reported.

The three Swedes, together with two Norwegians, allegedly shaved their heads and dressed as Muslim pilgrims. They then went to the square in the town of Hurghada, where they walked around a statue chanting the Muslim prayer, “Oh Allah, we obey you,” Aftonbladet reports.

They then started taking off their clothes, an act that local media reported provoked uproar among local people. Police then stepped in to arrest the men.

“If they hadn’t been arrested they would probably have been lynched,” Islamic expert Jan Hjärpe told Aftonbladet. 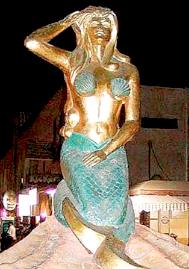 Two Norwegians, part of a group of intoxicated Scandinavian tourists on holiday in Egypt, were nearly lynched at the resort town of Hurghada this week, after their antics deeply offended the local population.

The two Norwegians and three Swedes ended up being arrested by local police, who protected them from an angry mob.

The trouble started after the five Scandinavian tourists got drunk, dressed themselves up like Muslim pilgrims and started dancing around the statue of a mermaid located in a town square, and pretending she symbolized Allah.

The Scandinavians apparently were trying to parody Muslim pilgrimages to Mecca. When they started stripping off their clothes, the local Egyptians had had enough and went on the attack.

Sent to Gates of Vienna by Fjordman.