See a need and organize a way to fill it; that seems to be the American Credo. It used to be barn-raising, way back when we needed barns.

But now there is a need to counter what has become an on-going, ugly problem at military funerals. Family and friends gathering to honor their beloved fallen soldiers have been met by members of the Westboro Baptist Church from Topeka, Kansas. This congregation, led by the Reverend Phelps, pickets at military funerals.

Are they anti-war? Peaceful protestors? Not exactly. Their signs proclaim gratitude for dead soldiers, all of whom are simply God’s retribution to the American people for permitting homosexuals to join the military. At a website called “God Hates Fags” they proclaim their poisonous mission — to degrade and disrupt the funerals of soldiers who die in Iraq and Afghanistan.

Free speech? Yes. But like other “loaded” free speech, where you are permitted to have your say has its limits. Obvious to everyone but the members of the Westboro Baptist Church, their heckling has gone way beyond the bounds of anyone’s scripture but their own. It has become their mission to show up and sing loudly “God Hates America” at military funerals, to the distress of family and friends of the soldier.

Before the war, this group had a history of disrupting other funerals:

Phelps and members of his Westboro Baptist Church have caused such a fuss that at least 14 states are considering laws aimed at the funeral protests. During the 1990s, church members were known mostly for picketing funerals of AIDS victims, and they have long been tracked as a hate group by the Southern Poverty Law Center’s Intelligence Project in Montgomery, Alabama.

Keeping track of haters is a good thing, but who is going to counter them? Who steps in to ameliorate the damage?

That was the question for a problem-solving group from the American Legion in Kansas in August 2005, as they met to strategize ways to counter the picketing and harassment of dead soldiers’ families at the funerals. What grew out of that meeting has become The Patriot Guard.

Imagine Reverend Phelps and his group showing up to disrupt and upset the funerals. Imagine also the presence of the Patriot Guard, motorcycle riders carrying American flags and making enough engine noise to drown out the hate-filled songs. That’s what’s been happening, even when members have to ride hundreds of miles in freezing rain.

The idea has spread quickly. By October they had motorcycle groups in other states, and an official website:

The growth has been phenomenal. Within a week their membership included many riders from associations like the VFW, American Legion, Rolling Thunder, ABATE, Combat Vets Motorcycle Association, Intruder Alert, Leathernecks Motorcycle Club, and almost five hundred individual riders… the PGR website had received almost 566,000 hits in the first two weeks! Patriots from all over America and several foreign countries responded. Emails were pouring in from people wanting to support and join the newly formed PGR. 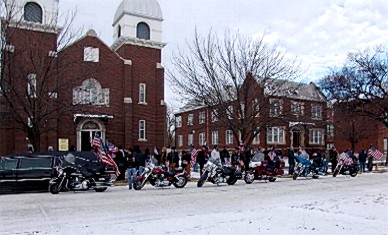 Now soldiers and their families have some protection. An honor guard which originated because hatred was showing up where it didn’t belong. And simply because it has always been a man’s duty to protect the vulnerable.

I predict the group will continue to grow, and continue to move, as long as there is need of their services.

Go here to see who rides.

Hat tip: And Rightly So