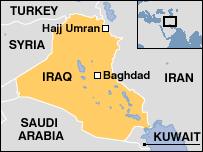 Things may be heating up on the border between — or among — Turkey, Iran, and northern Iraq.

There are several interpretations of Turkey’s massing of troops on the border and reports of Iran firing into northern Iraq and even crossing the border.

The heart of the problem is the Kurds…they never give up, they never go away. The Kurds are Sunni Muslims living in Turkey, Iraq, and Iran. Their distinct culture has persisted through millenia, and through years of active cultural suppression or the occasional attempt at genocide. In Turkey, till very recently, they weren’t permitted to speak their own language in public. In Syria, where they make up ten percent of the population, they are denied citizenship.

Way back when, in his Fourteen Points, Woodrow Wilson promised the Kurds their own country. In the Treaty of Sèvres, in 1920, they were granted sovereignty. However, Ataturk threw out that agreement in 1923 and the Kurds and Turks have been at it ever since.

As for Iraq, Saddam Hussein began in 1975 to eliminate the Kurds and for the next fifteen years he went about it very efficiently, as the Iraqi army bombed, poisoned, and destroyed five thousand Kurdish villages.

Iran has similarly persecuted the Kurds within their borders and there have been crackdowns on Kurdish areas. In July, 2005, there was a six week battle between the Kurdish and Iranians throughout the Kurdistan area. Kurdish newspapers were banned as a result.

Operation Iraqi Freedom has been beneficial to the Kurds. In contradistinction to the anarchy in many areas, the Kurd-controlled areas in the north quickly began re-establishing their territory and gearing up to a working economy.

Essentially, the Kurds are secessionists, however. It is they who have pushed for a federation in Iraq, and they make no secret of their desire to establish Kurdistan as a sovereign state once and for all.

It is this part of the Kurdish character which makes Iraq, Iran, and Turkey very nervous. Now there are reports of Turkish troops massing at the border with Iraq and of Iranian shelling and incursions into Kurdish territory in Iraq. The Iraqi government has called Turkey on this, which no doubt stays their hand to some extent.

We may see things heat up in this fractured area. Since Arabs operate always on the scarcity principle — perhaps their character follows their harsh geography — threatening the Kurds may serve as a pressure valve for some of the other conflicts among these three states.

As always, Kurds make the perfect scapegoat: sturdy, stubborn, indefatigable, and ineradicable. In fact, it should come as no surprise that there is a strong genetic link between the Kurds and the Jews. From Wikipedia:

In 2001, a team of Israeli, German, and Indian scientists discovered that the majority of Jews around the world, belonging to various different Jewish ethnic divisions, are closely related to the Kurdish people, more closely than they are to the Semitic-speaking Arabs or any other population that was tested. Most of the 95 Kurdish Muslim test subjects came from northern Iraq. Moreover, according to another study, the CMH (Cohen modal haplotype) is a genetic marker from the northern Middle East which is not unique to Jews. However, its existence among many Kurds and Armenians, as well as some Italians and Hungarians, would seem to support the overall contention that Kurds and Armenians are the close relatives of modern Jews and that the majority of today’s Jews have paternal ancestry from the northeastern Mediterranean region.[15]

In another study, Kurdish Jews were found to be close to Muslim Kurds, but so were Ashkenazim and Sephardim, suggesting that much if not most of the genetic similarity between Jewish and Muslim Kurds is from ancient times.

Here’s a news round-up from The Financial Times, The Middle East Newsline, BBC, Regnum(a Russian news report), Strategy Page, and Zaman, a Turkish paper. In fact, Zaman has a “man-in-the-street” (or, in this case, truck), who claims everything is normal:

Mehmet Gunes, a truck driver, said something interesting while on routine transit through the Border Gate Habur. “We are well accustomed to seeing such things. It’s the media that magnifies what we consider normal, I think.” Gunes also said that the truck drivers are not having any problem transiting border gates for the moment.

There is not any unusual military activity going on here against North Iraq, said Gunes, and some residents here are still unaware of the recent developments.

Nope, nothing to see here, especially if you’re reporting from Istanbul.

If anyone finds more, please let me know.

13 thoughts on “Are the Kurds a Steam Valve?”