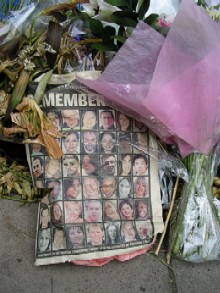 According to the website of the UK’s rightwing party, the BNP, the 7/7 bombings were a pale imitation of what was supposed to happen:

The key plotters behind the July 7th 2005 London bombings planned to trap and drown tens of thousands of innocent people, the BNP can exclusively reveal. A team of terrorists with a fifth bomb – intended to explode in the tube network directly under the River Thames – was arrested the night before.

The arrests were made when uniformed officers in police patrol cars stopped the terror gang, apparently by fortunate accident. Within minutes of their notifying their superiors they were ‘swamped’ by plain-clothes police, Special Branch and/or MI5 officers and the whole affair was taken out of their hands. They were ordered to tell no-one about the incident and several who have since tried to find out what happened to the small group of Islamics they arrested have been unable to do so. The men have vanished without trace.

The uniformed officers who prevented the atrocity are so deeply shocked by the Government and top security services cover-up – which maintains that the 7/7 bombings were carried out by a small independent cell of home-grown radicals with no overseas links or big ambitions – that one of them has come forward to tell us what really happened.

Not surprisingly, this has been done on condition of strict anonymity, so we can say nothing more about the source of the story, except that we are convinced that it is totally genuine. It is for mainstream journalists with greater resources and contacts than us to take up the investigation and find out more.

And do you think that “mainstream journalists with greater resources” will take up the investigation? Ah, yes, swarms of The Guardian’s finest out the door in droves to dig up the real story.

Don’t hold your breath…in the dhimmified UK, this would be viewed as just one more exercise in Islamophobia.

But the BNP report has several points to consider:

First, the fact that Al Qaeda had a detailed plan to flood the London Underground network was first revealed by the London Evening Standard on 9th August 2004. Sarah Getty wrote a report on the discovery by MI5, in an Al Qaeda training camp in Afghanistan, of plans and maps for a tube bombing intended to breach at least one tunnel below the Thames and to kill thousands in the resulting floods and mass panic in the pitch black tunnels.

Second, we draw attention to various news reports’ speculation – supposedly based on a cryptic Al Qaeda statement – that the London bus bomber had originally been supposed to strike on the northern line, quite possibly at Stockwell, so as to form a rough symbolic ‘cross’. This, of course, would have been far more obvious had a fifth bomb gone off in the middle of the ‘cross’ in London right under the Thames. This would also account for the otherwise inexplicable presence and ruthlessness of the police marksmen who ‘just happened’ to be at Stockwell two weeks later.

Third, it explains why the suicide bombers made the extraordinary and dangerous effort to travel all the way to London instead of blowing up their reportedly unstable bombs at targets in Yorkshire such as the White Rose shopping centre or a major sporting fixture. Further it clarifies why they felt it would be more productive to blow up tube trains which travel at an average speed of less than 30mph, rather than taking out the front carriage of a fast moving intercity train out of Leeds on which the resulting derailment alone would have killed hundreds.

Fourth, arrests the night before, and the discovery of the group at the very heart of the plot, would account for the otherwise incredibly coincidental top-level security measures which were actually in place on the morning of 7th July even before the first suicide bombs in British history were detonated.

Is this a credible story? Read the whole story at the link above. Given the history of cover-ups to avoid alarming the masses, one could surmise that it just might be. After all, a homegrown group of dissatisfied Pakistani boys is much less worrying than a concerted, knowledgeable, and detailed effort originating in the Middle East and designed to paralyze London with thousands of deaths. An even more horrendous attack than 9/11.

On September 10th would you have deemed 9/11’s events a credible story?

Just because you’re paranoid doesn’t mean they’re not out to get you.

UPDATE: Thanks to commenter jfp for pointing out it was July 7th, not the 11th, as stated in the original title for this post. I conflated Madrid’s 3/11 and London’s 7/7 (not to mention our own 9/11). At any rate, I have republished in order to reflect the correction. Unfortunately, this will delete the comments.