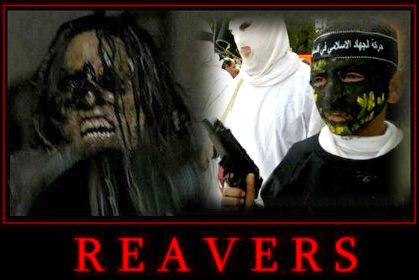 Reavers ain’t men. Or they forgot how to be. Comes to just nothin’. 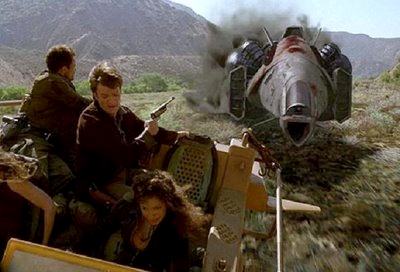 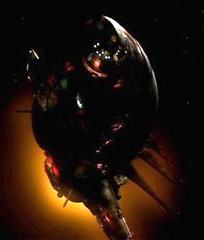 Zoe: They’re not stories.
Simon: What happens if they board us?
Zoe: If they take the ship, they’ll rape us to death, eat our flesh and sew our skins into their clothing — and if we’re very, very, lucky, they’ll do it in that order.

The darkness. Kinda darkness you can’t even imagine. Blacker than the space it moves in.

For those not familiar with the TV show “Firefly” and its subsequent film production, Serenity, the story line includes a savage breed of beings known as Reavers. Since the Firefly universe is set five hundred years in the future, one might — on a steady diet of Star Trek and other such sci-fi favorites — expect danger to come in the form of alien life. However, danger comes instead in the form of the Beast Within — the savage side of man’s nature that in civilized cultures is held in check by proper social conditioning, an instilled sense of morality, and regulation of the id by the superego. 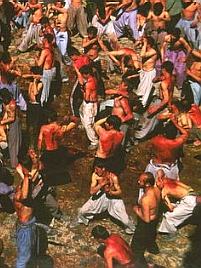 In “Firefly”, Reavers have lost that conditioning and that regulation. They have lost it to the point of being characterized as non-human. They pierce and tear their own flesh, wear the skins of their victims as clothing, and run their ships without using reactor core containment — meaning that Reavers suffer horrific and grotesque radiation burns and scarring. Reavers sow destruction, terror, torture, and death wherever they go. One of the facets of the show — and the movie to a lesser extent — is that Reavers inspire such terror in people that resistance is not just useless, but impossible — suicide and “mercy killings” are the usual responses to a Reaver attack. 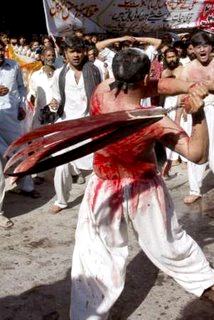 So what does this have to do with Islam?

Consider the photo to the right.

First he’ll try to make himself look like [a Reaver]… cut on himself, desecrate his own flesh…

— Mal Reynolds, speculating that a survivor of a Reaver attack will turn himself into one 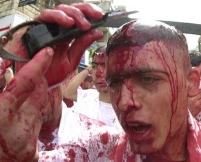 The pictures you see here are examples of the observance of the Day of Ashurah. I quote from a BBC news article on the gruesome spectacle (story in full here):

For Shia Muslims, Ashura is a solemn day mourning the martyrdom of Hussein in 680 AD at Karbala in modern-day Iraq… Some Shia men seek to emulate the suffering of Hussein by flagellating themselves with chains or cutting their foreheads until blood streams from their bodies.

And some men, well, they’d rather cut on their children instead: 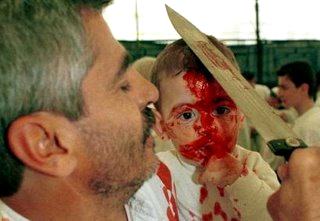 One time when I was very young, probably no older than the bloodstained tot in the photo, my father accidentally cut my finger open while clipping my fingernails. I have no recollection of this incident, but my mother tells me that she has seldom seen him more upset than he was at my pain. No parent should ever take pleasure in the suffering of their children. Looking at that man’s expression, I can only conclude that he’s PROUD of injuring his own son.

It seems readily apparent from just these three photos that there is an endemic bloodlust within Islamic culture. Although all the people above are all Shi’ites, there exists within Islamic society an obsession with blood (the image of a Palestinian man waving the bloodstained shirt of a dead comrade springs to mind). Are all Muslims savage self-immolators? No, of course not. But this fascination with spilling blood seems to be an Islamic theme, and it appears to pervade Muslim culture and history.

A Reaver is obsessed with pain — both causing it and feeling it…he takes pleasure in killing, and he wants his victim to remain alive as long as possible. He is utterly savage, without mercy or compassion of any kind. He has no fear of dying himself — he may even welcome the thought. The threat of death will not deter him from his bestial, brutal acts. (pages 187-188)

[Reaver] ships are crudely painted in garish colors, and often sport gruesome totems, such as the skeletal remains of victims strapped onto the bow… Reavers do not discriminate in their choice of victims and will kill men, women, and even little children without so much as a glimmer of mercy. (page 207)

In reading these two passages, I can’t help but think of the way Muslim terrorists conduct their campaigns. First of all, there’s the mutilation. Part of this blog’s mission has been keeping a watch on the acts of barbarism against Muslim women, and how they are raped, beaten, tortured, and killed at what seems to be the whim of their husbands and male relatives. We all know about — and some of us have even watched — the videos of terrorists decapitating Nick Berg and Ken Bigley, their cries of “Allahu Akhbar!” mingled with the agonized shrieks of their victims. We have heard how they brandish the heads of their slaughtered captives in a horrific frenzy of blood-soaked ecstasy. And we know from the suicide bombings that have taken place, first in Israel and then here in the United States, that Muslim terrorists willingly attack and murder defenseless people — children, the elderly, pregnant women. In one of the first particularly barbaric cases — the 1985 hijacking (led by the unmourned Abu Abbas) of the cruise ship Achille Lauro — Islamists shot a wheelchair-bound Leon Klinghoffer and then pushed him into the sea.

One of the other things the Serenity Role Playing Game mentions about Reavers is that they cannibalize ships and cobble various pieces together to make their own craft. That is, in living only to destroy, Reavers create nothing of their own. The deeds done by Islamists represent the same mentality. There is a distinct lack of manufacturing bases, modern market-driven economies, and specialized industry within many Muslim countries. Because they have no armament sector, the terrorist “armies” that we fight do not make their own weapons, instead using whatever they can get their hands on — AK-47s, ancient Soviet tanks, “technicals,” and the infamous IED’s designed to cause as much pain and suffering as possible. This cannibalistic approach was instrumental in the attacks of September 11th, where 19 men attempted to use Western technology to destroy Western culture.

“Firefly” and Serenity may be imaginary, but Islamofascist Reavers are real. They are the men who crash Boeing jets into American skyscrapers and the Pentagon. They are the men who joyfully slit the throats of unarmed civilians and journalists like Danny Pearl. They are the men and women who walk into crowded areas and detonate bombs strapped around their waists, reveling in the “glory” of their own death, as well as the death of those around them. They are the people who seek to destroy us. It remains to be seen if we choose to hold our ground against the face of evil — or whether, when confronted with the Darkness, we instead close our eyes and tell ourselves that nightmares don’t come true.

40 thoughts on “The Reavers’ Jihad”