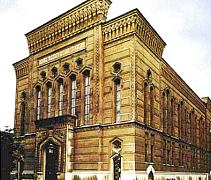 It’s been known for some time that Jews in Sweden are at risk, but the situation is deteriorating.

Currently, Jewish congregations spend twenty-five percent of their budget on security because the police do not act. The synagogue in Stockholm has been told to remove its protective concrete barriers.

Anti-Semitic essays or public remarks are permitted because of the “conflict” with Palestine. However, the opposite does not hold true: speaking out against terrorists is a hate crime.

Sweden has withdrawn from the military exercises in Sardinia because Israel is one of the participants.

Hamas leaders have been given visas to enter Sweden.The Jerusalem Post
reports here:

Swedish Ambassador to Israel, Robert Rydberg, was summoned to the Foreign Ministry on Thursday to explain his government’s decision to give visas to Hamas members to enter Sweden.

Director-General of the Foreign Ministry Ron Prossor said that Stockholm’s decision effectively legitimizes terrorism, and that one cannot make the distinction between a terrorist organization and its members, Israel Radio reported.

The Local, “Sweden’s newspaper in English,” published reports of growing anti-Semitism in the country:

The results, which appeared in Dagens Nyheter, showed that 26% believe that there is a ‘Jewish influence’ over the world’s economy, and 15% consider that influence to be ‘too great’. It also emerged that 14% believe that Jews use the Holocaust for political or economic ends.

One out of four of those questioned said they were negative towards the idea of a Jewish prime minister.

“What has long been a problem is the fact that anti-Semitism has in many ways been denied or trivialised, or that the problem has been seen as peculiar to marginal right wing groups,” said historian Henrik Bachner…

This isn’t new. For a while now, Jews have been hiding their identity to avoid being attacked in public. In 2004, The Stockholm Spectator blog, Stambord, (run by three Irishmen — what is that about?) noted that a few Swedish Jews had joined the IDF in Israel, feeling they were safer there than in Sweden.

As you can see from the previous post, Sweden’s Muslims grow more aggressive by the day. However, what we are less aware of – what has been kept under wraps for the last sixty years – is Sweden’s history of overt anti-Jewish laws:

For ten years up until the end of the Second World War, Swedish priests applied Nazi race rules to marriage.

Swedes who wanted to marry Germans were forced to prove that they were not Jewish. And ‘racially impure’ marriages could be annulled by Swedish courts, according to evidence presented by the Swedish Research Council on Tuesday.

Since 2001, two research programmes have explored various aspects of “Swedish fear, horror and fascination, but also kinship within Swedish science, culture and church life with Nazism and Nazi Germany”.

Any Swede who wanted to marry an Arian German was forced to sign an affirmation stating that none of the German’s grandparents were Jewish.

According to Lund University’s Professor Anders Jarlert, who led the research, Sweden’s application of these laws lacked historical and democratic legitimacy. It was also alien to the Swedish sense of justice, said Jarlert.

The evidence uncovered by Professor Jarlert shows that Sweden was not merely paying lip service to its powerful neighbour. The Swedish courts were complicit too, annulling a number of marriages and declaring the children born within them as illegitimate.

Stig Ekman, a professor of history with a special interest in Nazism, told DN that Sweden’s culture of secrecy is one reason why the details of the priests’ and courts’ lack of resistance to Nazi influence is only emerging now, 60 years later.

As this study proves, the anti-Semitism in Sweden was well in place before any Muslim set foot there.

As Maxed Out Mama said in a comment at Shrinkwrapped recently:

I think you are right about the Jews getting out of Europe. I hate it, but I think it’s time for them to go. I’d love to see the US have an official open immigration policy for any Jew of European extraction.

We would do well to start with Sweden, though France is surely as dangerous.