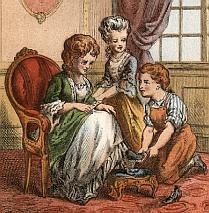 Have you ever noticed how many good chick blogs there are?

When Dymphna and I were on Tammy Bruce the other week, our hostess remarked that most blogs are by men. I thought about our blogroll, and since then I’ve been paying attention to what I read.

Sure, the Big Three blogs are all by guys. But Michelle Malkin was number one in the Ecosystem for a while — she may still be, for all I know.

Now, the hard-core political junkie type of blogging may be mainly a male preserve. But women are on the scene, too; Amy Ridenour does inside-the-Beltway blogging, and Pundita can’t be beat for foreign policy.

The milblogs, of necessity, are mostly by guys. But women like Air Force Wife get the word out, too.

Picking from our blogroll, you can see a lot of females among the most outstanding blogs: All Things Beautiful, Neo-neocon, Dr. Sanity, The Anchoress, Atlas Shrugs, Fausta, Sissy Willis, and Baldilocks stand out.

We have dames blogging the Counterjihad in Always on Watch, Terrorism Unveiled, and Roncesvalles, just to name three. The Headmistress helps educate us, and The Joy of Knitting gives us the Italian viewpoint in flawless English. Not to mention The Adventuress, Annika, e-Claire, Maxed Out Mama, Neddy, Sue Bob, and Meryl Yourish.

And then there’s Donnah at Florida Cracker, who is in a category all her own. Some blogs are a chore to read (Gotta read it, gotta keep up), and others I go to for information (Gotta get the latest on George Clooney). But reading Florida Cracker is pure pleasure — Donnah both entertains and informs. She finds the most unusual news in the most out-of-the-way places, and is intelligent and witty in the bargain. She says she’s a blonde, but you can’t hardly tell. And she even lets some snips and snails and puppy dog tails creep into her blog.

So let’s hear it for the girls.

When they’ve waxed the floor and rustled us up a mess of vittles, there’s nothin’ wrong with lettin’ ’em hit the keyboard, right, guys?

After the dishes are done, that is.

UPDATE from Dymphna: Here are some the Baron overlooked. Mainly because I keep forgetting to put them on the template–

Small Dead Animals
(This is just the voice of an ordinary Canadian yelling back at the radio –
“You don’t speak for me.” )

Villainous Company
(Dyspeptic Marine wife/tech wench attempts to enlighten the great unwashed of the blogosphere while dodging snarky commentary from the local knavery.)

And, of course, Debbie Schlussel.

16 thoughts on “Sugar and Spice”