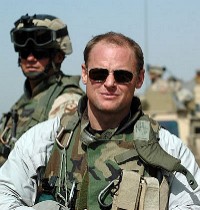 Michael Yon’s presence in the blogosphere has certainly expanded since he first began to write his essay from Iraq. Not only did he write well, but his stunning photos will remain as testaments to this war, long after all of us are gone.

I remember enthusiastically donating to his fund to buy a new camera and night vision glasses so he could go on late excursions without tripping over everyone in the dark. I also recall his tentative beginnings and wanting to know more about him. In the very early days, before he had much of an audience, he could actually respond to emails.

Those days are long gone. Now his site is called “Michael Yon: Online Magazine.” (linked above) It’s slick, attractive, and his readership has expanded exponentially. Certainly enough to hire a good website designer! He has appeared on Hugh Hewitt and can be seen in a number of newspaper stories.

An important feature of his site — as those of you who signed up for his newsletter know — is “Frontline Forum.” This is a section with stories from the soldiers themselves. As Mr. Yon says:

Our goal is for frontline information to break through and be heard. We hope that over time, a more comprehensive and accurate picture of what is happening on the ground can emerge.

This virtual organization primarily is run by a volunteer group of retired military personnel. They will read every story, with the bar set high for accuracy and our radar on full alert for embellishment and operational security. Over 100 volunteers have stepped forward, from all branches of the military, from grunts to generals, veterans from the Korean War forward…

Unfortunately, the Department of Defense is still ham-handed when it comes to selling itself. However, retention rates for the military are up, as are the recruitment numbers. And this is in spite of retired armchair generals who want to get face time on television and are willing to bray about the superiority of their strategy instead of what’s going on in the field.

So Michael Yon, on his own, has become an alternative to the brainstem media’s gore of the week. Having long since quit reading or listening to what they have to say, I know only what filter through their fretful noise. As one of his commenters puzzles:

“Michael; Your writing reminds me of Ernie Pyle, who’s stories I read during WW2. Newspapers all over the country carried his reports. Why are they not publishing yours? These are the stories the public is hungry to hear. Why aren’t their other writers writing about the everyday efforts of the solders like you are?”

For real information, I go to military sites or to Mr. Yon. It is amazing that he continues to soldier on, independently, supporting himself with sales of his photos, the re-issue of an autobiographical book first published in 1999 (when it sold only 8,000 copies).

Believe it or not, he has remained independent; he has done so with a little help from his friends — i.e., those who buy books, photos, and simply hit the pay pal button. He worries sometimes that he will end up wounded and penniless:

The time will come when I load up my gear and head back to war. I followed the recent news about another two top-journalists were badly wounded, with severe head-wounds, in Iraq. Only time will tell, but perhaps their careers and lives are over. Needless to say, I thought about that every day when I was in combat. I’d think about how important it is to have a war chest of funds in case the worst happened. In another one of those comparisons where independence suffers, no one pays health insurance premiums on this body. Disabled, for me, would mean homeless and helpless. And so, how is this work funded? Mostly, and most importantly, by people hitting the Pay pal button, or mailing in support. I can’t begin to express how grateful I am to the people who have hit the button.

Mr. Yon’s insistent independence obviously was formed in his childhood story. The ways that people manage misfortune and transcend it are our most important guides to our own struggles. As the Amazon review says:

Yon’s mother died when he was only seven, and that irreparable loss, combined with the neglect that he later suffered at the hands of his father and the refuge he found with his grandparents and his friends, creates the emotional anchor of the book. Yon handles such a complex combination of subject matter in a free-form, associative style, juxtaposing scenes of intensive weapons training, for example, with stories of life lessons he learned from his grandfather. The result is winningly rough around the edges: Danger Close is exuberant and thoughtful, tender and violent, and, for the most part, it works. Writing, for Yon, like joining the Army, was about having “demons to slay. Big, mean demons that haunted and chased me. I was going to kill them.”

The book now appears to be in its fourth printing. Amazing, isn’t it, how hungry we are for real heroes?

If you decide to buy his book, I suggest you get it from his site, here. He probably gets to keep more of the money from the books he sells himself.

In July last year, I posted on Mr. Yon’s work, asking for donations:

There are lots of requests for donations from blogs. People want to defray the costs of their time and effort and this is understandable. But in Yon’s case, the request is uniquely justified, uniquely worthwhile. He really is bringing you information you wouldn’t get otherwise. Yon’s war journal is worth the price of a subscription.

If you feel the same gratitude because he gives you the opportunity to know things you can’t get from anywhere or anyone else, go to Michael Yon’s blog, scroll to the bottom of the screen, and click the Paypal link to make a donation.

His page has changed — for the better — but the man is the same fine reporter he was then, and just as deserving of a donation. He is living proof of one of the definitions of grace: life lived under pressure. You deserve the opportunity to support him: it will do wonders for your karma.

Michael Yon is a most unusual man. He took his fortune in both hands and he ran with it. We can only pray that he makes it to the finish line.

3 thoughts on “Michael Yon in Afghanistan”