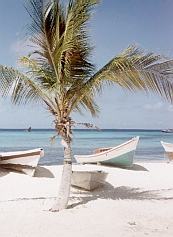 When you imagine Trinidad, do you picture lush tropical vegetation and pristine beaches, or do you think about beheading by cutlass?

Last Friday LGF drew my attention to a story in The Trinidad & Tobago Express concerning the murder of a Muslim man name Rasheed Ali:

The slaying of Rasheed Ali was the sixth murder in three days and the most brutal of all.

The murder toll is now 73 for the year. Ali, 24, was beheaded in the home he shared with his mother and stepfather.

His head and body were found several feet apart in the living-room of the home at Second Corial Road, Iere Village, Princes Town.

His mother Indra Harrinath could give no reason yesterday why someone would kill him.

Nasty stuff. But is it jihad?

When I want the latest information about Trinidad, I check out Eleven North. Unfortunately, Uncle Pavian’s blog is on hiatus, due to trouble with his ISP [Update: he says he’s back now].

So instead I emailed him to ask his opinion about the murder of Rasheed Ali, and here is his response:

My first impression from reading the story is that this is an “ordinary” crime that went over the top, rather than a religiously-motivated killing. Exactly what the motivation was remains unclear, but things are pretty disorganized over there, romance-wise and I would be surprised if there wasn’t some kind of gang connection.

I don’t know any more about the facts of the case than you do, but a couple of things stand out. For one thing, there have been 73 murders so far this year in the Republic. Dismemberment of the victim’s remains is uncommon but not unheard of, and cutlasses (what we call machetes) are ubiquitous.

It doesn’t look to me as if there was any political message attached to the murder of Mr. Ali. If there had been, we would have expected a video, or at least a written statement to have surfaced, linking the murder with some kind of Islamic greivance. This doesn’t seem to have happened this time. This is not to say that, when the killer is found, he will not turn out to be a member of the same mosque as Mr. Ali attended. But I’d be more inclined to think drugs, women, money, or another of the usual incitements to homicide were involved, based on what we know now.

There are a number of reported facts that don’t track with the jihad as we’ve come to understand it. Religiously-motivated murderers seem to prefer victims who don’t struggle, and there are usually several assailants. Moreover, Muslim on Muslim killings, while not unknown, would suggest some kind of internal power struggle for control of the Jamaat, the most notorious of the Republic’s Islamic organizations. As it happens, their imam, Sheikh Abu Bakr is now languishing in durance vile on a variety of charges relating to the operations of the Jamaat and is reported to be in declining health. Personally, I think Abu Bakr is more in the mold of Adolph Hitler than Mullah Omar . That is, he is more interested in establishing himself as Maximum Supreme Leader than he is in being Caliph. He’s simply latched onto militant Islam as a convenient cover for his criminal activities.

Bottom line is, no, I don’t think this shows a new aspect of the global jihad as much as it does an unusually violent but non-sectarian crime.

Incidentally, in looking over the comments to the lgf post, I am amazed at the level of ignorance on display (voodoo, tiny minority of Muslims, yada yada).

Lizardoids, do you hear what he’s saying to you? It’s time to buckle down, hit the books, and educate yourselves about Trinidad!

I don’t know what a”tiny” minority of Muslims would be, but according to my data, the population of Trinidad and Tobago is 6% Muslim, two or three times the percentage in the USA, and more than most European countries.

And, as a matter of interest, this particular statistic will not be appearing on future Bloody Borders Project maps. I checked with The Religion of Peace, and he’s not going to include it in his database. We’re both trying to restrict our figures to violence waged explicitly on behalf of Islam, and the case of Rasheed Ali does not seem to fit the profile.

But keep an eye on Trinidad, anyway…

2 thoughts on “Trouble in Trinidad”