Oh, joy. The gentle rain is falling on the unjust and those poor boys haven’t got an umbrella.

Power Line has a great picture from a recent New York Times cover on its Sunday magazine. It’s a photo of Mark Warner, recently the governor of Virginia and now a beginning runner in the long slog to the presidential primaries in 2008. 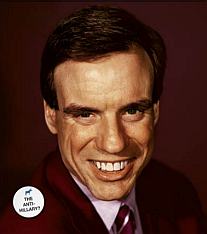 The picture makes former Governor Warner look like he’s laid out in his coffin. In what is reminiscent of Rathergate’s memo, this Warnergate photo has the experts arguing about whether this ghoulish shot of the Guv is deliberate or simply a technical mistake. Be sure to read the discussion at Power Line, including the Times’ explanation, and the differing opinions by photo experts. Given the circumstances, one could give the old gray doxy the benefit of the doubt — though you learn in reading the comments that the Times, lovely lady that she is, pays substandard rates to the photographers she hires.

Meanwhile, back at the tower, Moody’s is considering a downgrade of the Times’ credit rating:

In addition, Moody’s said it is concerned about intensifying cross media competition, including the Internet…

Memo:
To: The New York Times
From: The World

Hubris and mendacity will getcha every time.

Note: For a real dissection of an increasingly ugly creature, visit Bizzy Blog. They have names, dates, and crimes listed in detail – look at their post on what the Times did to the coal mine story. Biz also includes this cheery image, which — to my mind — is directly connected to the picture of Governor Warner. But that’s just my editorial spin on things. 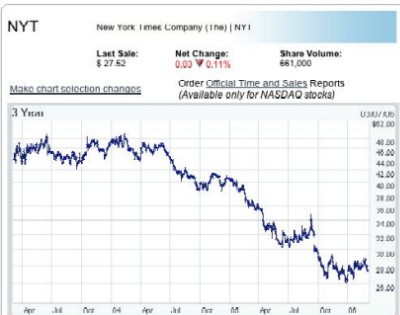