John Robb says we’ve entered the age of the “facile, agile, enemy.” He uses the situation in Iraq to make his several points. The first idea is concerned with the decentralized and autonomous groups of “zealots, patriots, and criminals”:

Unlike previous insurgencies, the one in Iraq is comprised of 75 to 100 small, diverse, and autonomous groups of zealots, patriots, and criminals alike. These groups, of course, have access to the same tools we do–from satellite phones to engineering degrees–and use them every bit as well. But their single most important asset is their organizational structure, an open-source community network very similar to what we now see in the software industry. It is an extremely innovative structure…

Indeed, because the insurgents in Iraq lack a recognizable center of gravity–a leadership structure or an ideology–they are nearly immune to the application of conventional military force. Like Microsoft, the software superpower, the United States hasn’t found its match in a competitor similar to itself, but rather in a loose, self-tuning network.

This he calls “open source warfare,” and offers information on funding: the “terrorist-criminal symbiosis.” Certainly we can see that in Iraq, where much of the mayhem can be traced back to the release from jails in Iraq — along with political prisoners — a large cohort of opprotunistic criminals. 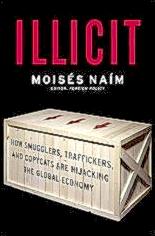 Mr. Robb’s second point details how the symbiosis fuels terrorism. For example, he says that Al Qaeda’s attack on Madrid was funded by the sale of Ecstasy. He quotes Moises Naim’s book Illicit to explain how globalization has fostered a huge network of criminal endeavor with a “technologically leveraged global supply chain” similar to Walmart (just another example of how the far Left is in the right book, on the wrong page — ed)

The tandem operations of terrorism and criminally acquired funding have permitted terrorists to fight large nation-states on the cheap and on an equal footing. The strategy is “systems disruption” — something we have discussed on this blog in the past. A country’s infrastructure is a fragile thing. Much of it relies on trust, prosperity, and the competency of those who maintain it. Terrorists, for very little money and few personnel, can disrupt this arrangement in a chronic way, destroying the alliance and loyalty of citizens who rely on the infrastructure which undergirds everyday life. Here’s how it plays out in Iraq, and may do elsewhere in the near future:

Over the past two years, attacks on the oil and electricity networks in Iraq have reduced and held delivery of these critical services below prewar levels, with a disastrous effect on the country, its people, and its economy.

The early examples of systems disruption in Iraq and elsewhere are ominous. If these techniques are even lightly applied to the fragile electrical and oil-gas systems in Russia, Saudi Arabia, or anywhere in the target-rich West, we could see a rapid onset of economic and political chaos unmatched since the advent of blitzkrieg. (India’s January arrest of militants with explosives in Hyderabad suggests that the country’s high-tech industry could be a new target.) It’s even worse when we consider the asymmetry of the economics involved: One small attack on an oil pipeline in southeast Iraq, conducted for an estimated $2,000, cost the Iraqi government more than $500 million in lost oil revenues. That is a return on investment of 25,000,000%.

The tipping point for this kind of warfare and turmoil has been reached, according to Mr. Robb:

Now that the tipping point has been reached, the rise of global virtual states–with their thriving criminal economies, innovative networks, and hyperefficient war craft–will rapidly undermine public confidence in our national-security systems. In fact, this process has already begun. We’ve seen disruption of our oil supply in Iraq, Nigeria, Venezuela, and Colombia; the market’s fear of more contributes mightily to the current high prices. But as those disruptions continue, the damage will spill over into the very structure of our society. Our profligate Defense Department, reeling from its inability to defend our borders on September 11 or to pacify even a small country like Iraq, will increasingly be seen as obsolete. The myth of the American superpower will be exposed as such.

What he proposes for the future is both agonizing and exciting. As he says, with the next “wave of adaptive innovation” taking hold:

…all of these changes may prove to be exactly the kind of creative destruction we need to move beyond the current, failed state of affairs. By 2016 and beyond, real long-term solutions will emerge.

I have omitted his middle term, a long and detailed scenario of what may happen. It is not anything you might put together on your own, though no doubt pieces of these ideas are floating around in your head even now.

Meanwhile, Nelson Ascher describes what he calls “the parasitic mindset” of the terrorists who undermine us by using things we have perceived as an integral part of our civilization — airplanes and skyscrapers, just to name two.

He thinks if we use the lessons learned in World War II — lessons the Israelis put to good use in 1967 — namely, that the enemy’s defenses must be taken out before we can begin to achieve our objectives, we can prevail.

In both those situations, the German and the Arab air forces, respectively, had to be destroyed in order to prevent them from being turned against us. We didn’t learn that tactical lesson until we got a toehold in “fortress Europe,” and that didn’t happen until 1944. Before that, RAF and US bomber crews had a high mortality rate. After we changed tactics — destroying the enemy’s aircraft on the ground, rather than attempting to hit their infrastructure — the tide of war changed.

Before September 11th we could not have perceived the parasitic nature of our enemy — or, in some of the more hardended cases on the Left — that we even had an enemy. Ascher takes up the metaphors of biology to describe the relationship between the West (really, just the Anglosphere) and those bent on our destruction as an opportunistic parasite on a formerly healthy host.

He says it began with oil, but then spread to everything else; that whatever we create, they in turn exploit, including our political corrrectness, surely one of the most poisonous ideologies — right up there with miltant Islam — since the rise of Communism. In fact, it could not exist without a socialist foundation. Socialist and self-hating.

Ascher warns us — we aren’t dealing with idiots:

We’re dealing with a very intelligent foe whose mindset we haven’t yet fully began to appreciate. And, besides being at war, we’re also competing with them. They are quick minded and so we have to be even quicker. Unfortunately, they are the ones who are acting, while we are but reacting to them.

That’s the key: we’re still in reactive mode. Our military is smart, valiant and adaptive. But they need those in charge to change the tactics in order to achieve victory.

How to do that? Go back and read Mr. Robb’s “Open Source Warfare.” This is a battle on many fronts, but one of the most important is ingenuity, and we have that in abundance, if someone could just muzzle the politicians long enough.

Or, perhaps, as one could infer from Mr. Robb’s forecast of things to come, politicans will simply become impotent. And perhaps gradually move on, as the centers of power become decentralized and open-source.

We can only hope.