Yesterday’s cruise ship fire was all set to pass below the Gates of Vienna radar. And why shouldn’t it — what, after all, does yet another cruise ship debacle have to do with jihad?

However… we have an occasional correspondent in the intelligence business, and last night she contacted us with an intriguing idea from the murky shadows of spookdom. Apparently certain elements in the intelligence community are convinced that Al Qaeda has taken an interest in cruise ships as targets after the attempted pirate attack on such a vessel off the coast of Somalia last November.

Mind you, this latest incident on the Star Princess seems unlikely to be jihad-related. News 14 Charlotte gives the details of the story:

A fire apparently started by a cigarette broke out aboard a cruise ship early Thursday as it sailed through the moonlit Caribbean, injuring 11 people and scorching about 100 rooms. One elderly American passenger died from a heart attack, the cruise ship company said.

The Star Princess, carrying 2,690 passengers and 1,123 crew members, bore evidence of the nighttime drama as it pulled into Montego Bay’s port. About 85 exterior cabins were blackened from the fire, a stark contrast to the otherwise gleaming white exterior of the ship.

If this was a mujahideen operation, they must be embarrassed by the result. Smoke inhalation and a heart attack! Not much of a payoff there. 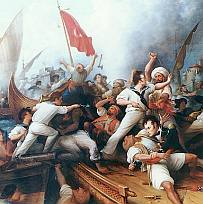 But consider: cruise ships are horizontal skyscrapers, and this one had more than 3800 people on board, more passengers and crew than the number of victims killed on September 11th.

Those two-bit Somali pirates failed in their efforts, but suppose the Great Jihad took on the task instead? It would gain an enormous propaganda victory, cripple an important component of the tourist trade, and make sea travel every bit as burdensome as air travel is now.

You can picture the burning, sinking ship on live video taken from circling helicopters and beamed to every TV set in the world for days on end. Images of charred bodies floating in the water, injured victims screaming while being winched into Coast Guard helicopters…

How could Al Qaeda not do it?

I’m a hayseed when it comes to intelligence matters, so I invite readers with expertise and/or opinions on the topic to contribute ideas. Here are a few areas to think about:

That’s what on old geek like me can put together after ten minutes of fooling around with the idea. What do you think those Al Qaeda bastards are dreaming up in the lantern-lit caves of Waziristan?

11 thoughts on “The Jamaica-Somalia Connection”