The EU had its annual spring summit this week in Brussels. No surprising news. As usual, the dirt was swept under the rug and everyone played nice. As they always do, everyone politely avoided the condition of the naked emperor, telling him what a swell outfit he had on.

What the EU will not admit, much less talk about, is the fact that they are in sad shape. All those utopian plans have, to date, produced an entity whose problems resemble those of the world in 1932:

Europe’s present social model is unable to tackle the modern challenges of globalization, and has left Europe with gigantic problems: an unsurmountable public debt, a rapidly ageing population, 19 million unemployed, and an overall youth unemployment rate of 18%. The unemployment figures may easily be doubled to account for hidden unemployment. The untold reality is that Europe’s real unemployment stands at the level of the 1932 Depression.

As Brussels Journal further puts it, this is a “man-made disaster.” While the rest of the world rocks along on the biggest economic boom in thirty years, Europe is stagnating, its growth estimated to be about 1.5 %.

This would be funny if it weren’t so sad. Having our allies in this kind of failed-Keynesian daydream does us no good. In fact, it harms our growth and our stability in the long run.

Leaving aside the EU’s protectionism, a huge and unworkable Constitution written by bureaucrats, and its internecine wars, an organization founded on envy and resentment is set up to fail. No better example can be found than the behavior of Jacques Chirac this year at the Summit. While everyone else struggled to get along, Jack had a hissy fit: 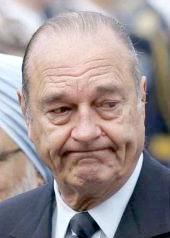 …perhaps the most memorable moment in Brussels was when French President Chirac stormed out to protest a decision by fellow Frenchman Ernest-Antoine Seilliere, head of the European UNICE employers group, to speak English.

Chirac explained that he had been “deeply shocked.” But his protest raised many eyebrows in Brussels, where English has increasingly overtaken the traditional dominance of the Gallic tongue in the EU corridors of power.

“Europe has other worries and it’s a waste of time to have responded to such questions,” said Luxembourg Prime Minister Jean-Claude Juncker, who is usually a staunch francophile.

One hopes the EU can roust itself out of its socialist nightmare and join the rest of us.

One also hopes that President Chirac chokes on the rind from a piece of brie and puts us out of his misery.