March 9, 2006. The opening volley was fired across the bow of NOW by the National Center for Men. That was the day they filed a suit in a U. S. District Court in Michigan —

on behalf of a man’s right to make reproductive choice, to decline fatherhood in the event of an unintended pregnancy

The Center for Men has trademarked this suit as “Roe vs. Wade for Men” and they are filing on behalf of Michael Dubay, of Saginaw, Michigan.

Mr. Dubay is being ordered to pay child support for a small human being he never intended to bring into the world, and whose existence — he was assured by his former girlfriend — could never materialize since his partner was unable to bear children. Mr. Dubay also claims that his girlfriend knew full well that he did not choose to have children.

So. The Center for Men is asking for “reproductive equality.” They have begun distributing (for a fee) a document entitled “Reproductive Rights Affidavit” which could be filed by men in court. It says, in part:

“I will not recognize the moral authority of a court to strip me of my constitutional right to reproductive choice. I will challenge any court order that seeks to impose a parental obligation upon me against my will by asserting my right to equal protection of the law.”

Leaving aside the wimpy tones of “moral authority” — what are they going to do, flee the country?— Mr. Dubay and the Men’s Center don’t expect the win this one, and they are prepared for the long, expensive slog as the case wends its way up the system to (they hope) the Supreme Court.

Mr. Dubay is angry, obviously. He probably feels he was duped. As a computer technician, he may consider his financial resources inadequate to bear the costs of raising a child. And if what he reports is accurate, at the very least his former girlfriend has some characterological issues she needs to address…especially if she is raising a male child.

But since Mr. Dubay has chosen to lay his affairs on the table, the intimate sexual arrangements he and his former girlfriend entered into bear thinking and talking about. There are several generational layers here.

In the very old days, Mr. Dubay would have had a shotgun wedding that may or may have not endured. Then, beginning with the great sexual license freedom of the pill, women began to have the same “choices” as men, even if those so-called “choices” were not anything they were biologically or emotionally equipped to handle. However, with the rise of the politically correct women’s groups, there suddenly came into being the modern convenience of easy abortion. What had they to lose?

What indeed…but that is for another post. At the moment, we have the troublesome knot of Mr. Dubay, his former girlfriend, and his miracle child. Miraculous and inconvenient, and not a St. Joseph in sight to relieve him of his burden. 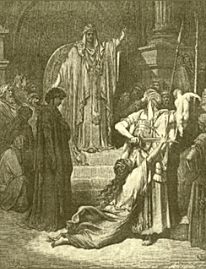 We need a Solomon here. Someone to cut the knot of the problem. Except that he would simply divide the child between them, perhaps the right side to Mr. Dubay and the left side (or the left-overs) for the child’s mother. This might suit Mr. Dubay, but it couldn’t be termed a decision in the best interests of the child and his former girlfriend — that five hundred dollar a month albatross — would no doubt be most unhappy.

So it seems we have sexual freedom and utopia gone sour. Very sour, bitter, and with no possibility of resolution. Is there help for Mr. Dubay? Probably not. Is there hope for Mr. Dubay’s child? Decidedly not. Every child needs a father, but this is one case where half a loaf is indeed worse than none at all. For his money, Mr. Dubay is certainly entitled to reassurance that his former girlfriend will be legally restrained from speaking ill of him to his offspring. And if not for his sake, at least for the sake of the poor kid. His karma already sucks, big time.

My hope is that this suit blows the whole stinking mess sky high, with the sanctimonious “better-than-men-girls-rule” agitprop finally reduced to smithereens. Confetti. Were hardcoore feminists not so obviously anti-male, men like Mr. Dubay would not be in the position they’re in now. But the man-bashing, cultic women’s studies culture has brought this on themselves. Now their partial-birth, easy out abortions have hit a great big logical snag. For if a woman becomes pregnant, then her partner deserves some say in the outcome of her pregnancy. And that definitely complicates the equation geometrically. The rules are going to change before Mr. Dubay and his ilk are done.

Here is my suggestion to men: if you are unthinking enough to enter into unrecognized, informal, and societally uncontrolled relationships with members of the opposite sex you need a lot more than a condom and your good will to protect yourself. You had better start carrying legal forms with your contraceptive devices. They could read something like this:

We, John Doe and Jane Roe, are consenting to sexual congress on this date. Jane Roe agrees that should any issue result from this sexual engagement, she will not pursue John Doe for any child support or medical care arising from complications of pregnancy.
Signed and witnessed and notarized on this date.

Then, upon meeting a woman with whom you wish to engage in sexual congress, you could whip out the forms and your notary before you unzip and whip out anything else. Otherwise, I suggest:

celibacy,
or
marriage to someone you can stand to build a life with,
or
paternity insurance.

Yes, if you’re a busy man, the third choice could result in costly premiums, but surely no more than what Mr. Dubay has sadly and unwittingly contracted to pay for during the next eighteen years.

It is sad that the tensions between men and women have reached this exploitative and explosive level. What we are experiencing again is the Law of Unintended Consequences. All that “freedom” was more than we were mature enough to handle. We saw the freedom, but we ignored the responsibility. Again.

The old ideas of covenant and contract between men and women need to be resurrected, dusted off, brought up-to-date, and introduced once more into public conversation. It used to be they needed no explaining.

But that was before NOW.

13 thoughts on “King Solomon and the Roe-Men”