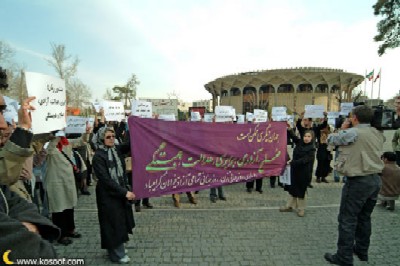 Norm Geras has a story up today of the International Woman’s Day rally held in Tehran. You can imagine the outcome of such a convocation.

According to Norm’s report, they carried placards calling for equality, peace and freedom. It doesn’t take much imagination to see their reception: Electric batons, applied judiciously by the police, and by Big Brother’s little helpers, Hezbollah.

Norm says he received an email from Iran—

the police beat both men and women, including foreign and local journalists and an old Iranian woman poet, Simin Behbahani. They also made arrests.

He also linked to The Foreign Affairs Committee of the National Council of Resistance to Iran. They have a detailed response to the behavior of the regime:

On International Women’s Day, the misogynist ruling regime in Iran has initiated a crackdown on Iranian women in streets and public areas around the country.

In Tehran, women took to the streets in different areas of the city such as University Park, Revolution Square, and Park-e-Lale chanting “Down with the dictator, long live freedom.” They gathered while the suppressive State Security Forces (SSF) surrounded the area in a bid to disperse them. At 17:00 local time, the SSF began lobbing teargas into the crowds.

A curfew was declared around Tehran University and Park-e-Lale, according to eyewitnesses. SSF and vigilantes attacked and arrested women demonstrators in the Park-e-Daneshjoo who were singing anti-regime songs. The protestors, however, continued their demonstration…

Tehran residents joined the women protestors in solidarity and confronted the regime’s forces, reports indicated. Special Guard units of the SSF joined regular and paramilitary vigilantes in the attack on the protestors.

Another gathering to commemorate Women’s day was held in the western city of Sanandaj. The large gathering in front of a city theater called for liberty and an end to inequality and discrimination against women. “Stop executions and stoning,” the large gathering of women chanted.

Sometimes, living in our safe little world, it’s hard to imagine the courage and intelligence — and, in the final analysis, faith — it takes to survive and surmount the environment in Iran.

Any minute now, those American dilettantes — the ones who wear pink and swan around — are going to mount a humungous demonstration to protest the electric batons used on women in Iran, even on aged and venerable poets.

But just in case they’re delayed, don’t stay up to see the crowd on the late news.