Little Green Footballs reports that Israel is on high alert for terror attacks. Linking from Ynet News, he says that fourteen of the eighty-five warnings are “concrete.” 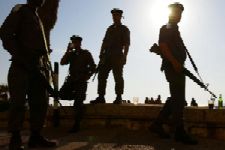 Ynet says 22,000 police will be deployed around the country for the elections. That’s more personnel than they called up to clear out the terrorist cells in Gaza and make Yasser Arafat give up the assassins who ended up in the Jericho prison — the ones the Israelis recently removed from their relatively luxurious apartments after the Brits and American monitors decided it was too risky to their own well-being to stay around any longer.

This is a big and dangerous deal:

Islamic Jihad is the prime culprit and intends to carry out attacks using the group’s terror cells in the northern West Bank, officials said.

Security authorities have ordered a massive deployment that will start as early as 6 a.m. Tuesday, an hour before polling stations open. Police across the nation will move to an emergency deployment, with about 22,000 police and Border Guard officers to be sent to secure Israeli communities while reinforcing areas near the Green Line and the Jerusalem region.

Police forces will deploy several rings of security and set up roadblocks at the entrances to major cities. Overt and covert checkpoints will also be set up inside cities and security around polling stations will be boosted.

They are also boosting security at malls since Israelis have the day off for voting and will likely spend part of it shopping. That’s some suicidal shopping they have in mind, don’t you think? I mean, what are people thinking? “Oh, those silly terror alerts. What’s a jihad attack compared to a clearance sale?”

Okay. Fourteen attacks with high probability. More than eighty possibles. Let’s see what the Israeli police can do with this. Here’s one development that has possibilities:

Officers will also work to thwart attempts to forge ballots and create disturbances, and will for the first time make use of a new computer system that shows in real time the location of every police vehicle and officer.

Can twenty thousand police, computer assistance, and a most realistic appraisal of their adversary stave off any of this? All of it?

Too bad for the jihadists that hatred doesn’t kill. Their sheer animus would have melted the ground Israelis walk on by now.

Come to think of it, if the mere force of irrational hatred were enough to kill, Bush and any unwitting Republicans would be long gone. The spittle cleaned from their chins, Kos’ kids would be running things by now.

One thought on “Fourteen "Concrete" Plans for Jihad”