UPDATE: Commenter Andre Szara sent the following link from a story in CNN from 2005. Old news but useful information.

The item outlines the Patriot Act requirements for truck drivers; like most government regulations it makes for depressing reading. Basically, they’re going to:

So beginning in January, 2005, all truckers applying for hazmat licenses would be fingerprinted upon application. The rest will slowly come through the mill:

The fingerprints will be submitted to the FBI, which will run them against its extensive criminal database. If the background check reveals that the driver has been convicted of terrorism, espionage, murder or certain other felonies, the driver will be permanently banned from hauling hazardous materials. They also will be banned if they are fugitives or adjudicated as mentally ill.

Critics say this is a “feel-good” resolution. Of course, they will be the first in line to complain if somehow a hazmat driver becomes involved in a terrorist act.

Have you noticed that for those who thrive on angry outrage, whatever attempts are made to make things safer are both useless measures and, at the same time, not enough? So if nothing happens, they can sneer, and if awful destruction occurs they can point fingers. These are the people who cringe at the idea of domestic intelligence because it might involve someone examining their library card use.

In the phrase “useful idiots” it is the noun which is operative here.

Fox News had a video up tonight titled “Warning Signs.”

The FBI in Kansas City is said to be conducting an investigation into a truck-driving school in West Plains, Missouri. 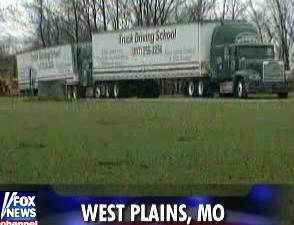 The South Central Career Center, with its peeling sign out front, offers truck driving lessons. It seems to have attracted a large number of Somali Muslims from a community of Somalis in Kansas City. In the last 18 months, the majority of its students have been Somalians.

Should we be concerned? Probably. Why in the Midwest? Why the concentration of Somalis in this line of work? Is this anything like flight training school except you don’t have to learn to land? Are they bothering to learn how to brake one of those things? 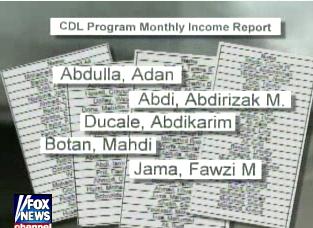 In a way, trucks are of more concern than planes. They are ubiquitous, a commonplace in our everyday landscape. They pass us all the time on the highway and we don’t even notice. An 18 wheeler loaded surreptitiously with something explosively unstable could be a nightmare beyond the wildest imaginings of whatever concerns Dubai Ports raised.

The FBI is investigating, but it isn’t talking. I’ll bet a great many driving schools are under scrutiny. Fox News just happened upon one of them.