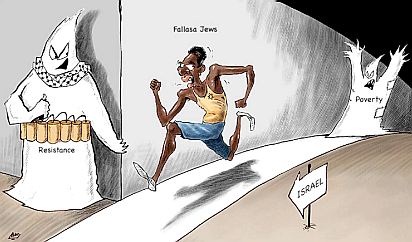 The Danish cartoon controversy had me googling images yesterday, looking for Nazi and Arab depictions of their common Zionist enemy to compare to the blasphemous images of the Prophet Mohammed (pbuh) published last year in Jyllands-Posten. The German cartoons from the 1930s and the Arab cartoons of recent years are remarkably similar, and there is no shortage of examples.

But the above cartoon particularly caught my eye (click on it to see the larger image). I found it on an Al-Jazeerah cartoon page from 2004, and the caption reads:

Israel seeks more immigrants, from Ethiopia this time: Fallasa Jews running away from poverty in Ethiopia to the conflict with the Palestinian people. (Amjad Rasmi, Arab News, 1/13/04)

Notice that “conflict with the Palestinian people” means being blown up by a grinning suicide bomber lying in wait. Very subtle. There are other things to notice about the cartoon: the Sambo-like caricature of the African, the inclusion of armpit hair in the drawing (is that some kind of Arab insult? Or simple verisimilitude?), and the casual acceptance of the iconic suicide bomber as a normal part of Palestinian “resistance”.

What Al-Jazeerah refers to as “Fallasa” Jews are more commonly known as Falasha. They migrated to Ethiopia so long ago that their exact relation to Israel is not known. Some accounts have them as descendants of one of King Solomon’s sons; others name them the lost tribe of Dan.

A useful article about them, The History of Ethiopian Jews, can be found in the Jewish Virtual Library.

“Once they were kings. A half million strong, they matched their faith with fervor and out-matched the Moslem and Christian tribesmen around them to rule the mountain highlands around Lake Tana. They called themselves Beta Israel—the house of Israel—and used the Torah to guide their prayers and memories of the heights of Jerusalem as they lived in their thatched huts in Ethiopia.

“But their neighbors called them Falashas—the alien ones, the invaders. And even three hundred years of rule, even the black features that matched those of all the people around them did not make the Jews of Ethiopia secure governors of their destiny in Africa” (“Falashas: The Forgotten Jews,” Baltimore Jewish Times, 9 November 1979).

For centuries the Falashas ruled and prospered in Ethiopia as Christianity spread through North Africa. The 7th century, however, brought Islam in conquest to the continent, and the region was thrown into turmoil and violence.

But it was not the legions of the Prophet that devastated the Ethiopian Jews. The surrounding Christian kingdoms fought with them continually, and in the 17th century they were finally reduced, brought into slavery and subjugation, their holy books burned and their chronicles lost.

But they kept alive an oral tradition, continuing to practice their variant of Judaism down to modern times. Then, in the 20th century, the arrival of the new ideological barbarism threatened the Falasha Jews again. With the invasion of Italian Fascists in 1935,

…their stability was greatly threatened as the Italian army marched into Ethiopia. Ethiopia’s ruler, Emperor Haile Selassie fled his country and actually took refuge in Jerusalem for a short time. Selassie returned to power in 1941, but the situation for the Beta Israel improved little.

But with the establishment of Israel after the Second World War, the Jews in Ethiopia had an advocate and source of aid.

In the 1970s Selassie was overthrown in a coup, and Communism came to Ethiopia. The new dictator, Colonel Mengistu Haile Mariam, began the inevitable collectivization process, and the Jewish communities were ripped open and exposed to the depredations of their ethnically distinct neighbors.

Soon Mariam instituted a policy of “villagization,” relocating millions of peasant farmers onto state-run cooperatives which greatly harmed the Beta Israel by forcing them to “share” their villages—though they were denied the right to own the land—with non-Jewish farmers, resulting in increased levels of anti-Semitism throughout the Gondar Province. According to the Ethiopian government, over 30% of the population had been moved from privately owned farms to cooperatives as of 1989.

Throughout the 1980s a concerted effort was made to evacuate the Falasha Jews and relocate them in Israel before they were completely destroyed by the Mengistu regime. Two large groups were evacuated during the ’8os, but the big opportunity came in 1991, when Colonel Mengistu Haile Mariam was overthrown by rebels and fled the country.

There was then a brief window of opportunity for the rescue of the Falasha Jews, before the new rulers in Addis Ababa began their own extermination, or took the Jews hostage.

Rebels claimed control of the capital Addis Ababa shortly thereafter, and the situation of the Beta Israel took top priority in Israel. The Likud government of Yitzhak Shamir authorized a special permit for the Israeli airline, El Al, to fly on the Jewish Sabbath. On Friday, May 24, and continuing non-stop for 36 hours, a total of 34 El Al jumbo jets and Hercules C-130s—seats removed to accommodate the maximum number of Ethiopians—began a new chapter in the struggle for the freedom of Ethiopian Jewry.

Operation Solomon, named for the king from whom one of the theories suggest that the Beta Israel draw their lineage, ended almost as quickly as it began. Timing was crucial, since any delay by Israel could have allowed the rebels to hold the Jews as bargaining chips with Israel or the United States. A total of 14,324 Ethiopian Jews were rescued and resettled in Israel, a modern exodus of the grandest design. Operation Solomon rescued twice the number of Jews in Operation Moses and Joshua, in a mere fraction of the time. Though it is too early to predict their impact on Israeli society, the 36,000 Ethiopian Jews now living in Israel (rescue efforts are under way to transport the remaining 2,100 Ethiopians who wish to emigrate to Israel) will play an important role in Israel for generations to come.

So there’s the Falasha Jew, fleeing poverty in Ethiopia and running to the demonic welcome awaiting him at the hands of the Paletinians. Why was he significant enough then, 13 years after the last major evacuation from Ethiopia? Why did he rate a nasty Arab News cartoon?

Arabs hold African blacks in low esteem, even if they are Muslim; embracing Islam does not make a black equal to his Arab betters. For centuries they have been brutalized and enslaved by Arab Muslims. So a black African Jew must be the lowest of the low — a Zionist and racial inferior, all rolled into one.

Perhaps that’s the reason for the cartoon. In any case, enjoy the iconography of those who would teach the people of Denmark a thing or two about respectful images.

It occurs to me that they show the armpit hair as a way of demeaning the Jew. According to various on-line fatwa resources, Muslims are obliged to remove most of their body hair, including pits and privates. I’m guessing that showing body hair that Muslims remove would be demeaning to the Jewish figure in their eyes.

Oddly enough, Ask The Imam says plucking one’s eyebrows as a huge no-no, demonstrating once again that the whole religion is based on Mohammed’s taste. One description of Mohammed seemed to say he had a uni-brow…

17 thoughts on “The Falasha Jews”