The Dinocrat and Planck’s Constant disagree on the invention inventory in the Muslim world. In his post “How does the modern world look when you have done nothing to help create it, and innovation is a threat to cherished beliefs?” (linked above) the former points to the paucity of Islam’s contributions to the world:

Americans have been messing around and creating things throughout the history of the nation. We take it for granted that people are fiddling around in their garages inventing oscilloscopes or wonder drugs or extreme sports. But what would it be like to live in a land where people invented nothing, where technology came to you as though from Mars? More than this: what if that constant progress and tinkering represented a threat to the sufficiency of the founding documents of your culture and religion? Judging by the numbers, that is apparently the current state of thought in some major Islamic countries. Take Saudi Arabia, which recently went six years without granting a patent. 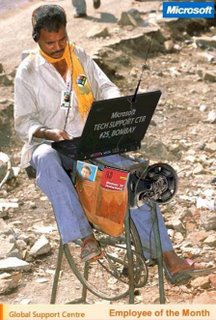 “Au contraire,” says Planck’s Constant (that’s French for “hold it right there, bub”). He then proceeds to defend his argument with examples:

I have to disagree [with Dinocrat’s thesis]. There are many, many creative inventions in Islam, but they are unrecorded because most simply do not apply for a patent.

For instance, there is the very clever and portable Microsoft customer-service-center made from an old scissor sharpening platform.

Unfortunately for his clever notion, this is one case where the words are worth more than the picture.

Dinocrat gives us some appalling statistics:

In other words, says Dino, rather heatedly:

Remember this pathetic performance the next time some bonehead tries to argue cultural equivalency to you. How dare these people try to impose their ways on us, or dictate anything about the way we should live. Theirs is a formula for poverty, stagnation and misery. Imagine: over a billion people, and they have fewer patents in their entire recorded history than did the citizens of Utah last year.

Imagine if they corralled all that effort into creativity? But how can you be creative when submission is your only tool? Oh, right: submission permits you to be murderously creative.

As long as you’re killing something — why create away, brother!

27 thoughts on “So What’s This About Muslims and Patents?”