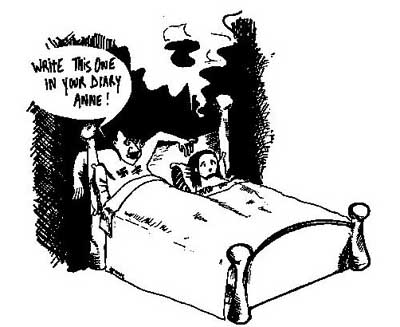 Finally. While looking on the Hy Science blog to see if they had any information on the avian flu death in Lithuania (they didn’t) I came upon something equally compelling. The picture, which I was unable to find last night, is now posted right there at Hy Science. They put up the lovely comic depiction of Anne Frank and Hitler’s post-coital conversation that’s been making the blogorounds. This sort of satiric “art” ought to be seen far and wide, along with “Piss Christ” and the Virgin Mary in horse manure and other “avant-garde” philistinism that plagues much of government-subsidized art work.

It ought to be seen so that we have a full understanding of what it means to be tolerant. In this case, it means I am free to be offended, and Mr. Serrano is free to work out his problems in public. In the West, we don’t find it necessary to blow people up, burn their flags, or otherwise put them in harm’s way because they create offensive pieces and call them art.

In fact, we don’t even find it worthwhile to issue fatwahs on the “art critics” and “experts” who encourage such trash. We are able to differentiate enough to simply enjoy the phantasy of offing the “artists” and those critics who love them. We are mature enough to put down the pistol even when some mandarin blathers on predictably about “cutting edge transgressive art.” You hear that phrase and you know that The Vagina Monologues is coming to a university theatre near you real soon.

Oh… there is one stratum of our society that does indeed resemble the Muslim culture in their extreme reactive hostility to any criticism of their own particular sacred cows. People who appreciate The Vagina Monologues as art definitely do not appreciate those who stand in solidarity with them by attending the play in rented penis costumes. This ummm… vaginal group has been known to become violent at the notion of satire directed toward them. Perhaps this characterological trait is why you don’t see as much interest evoked in the leftist groups by the Muslim outrage. Leftists understand outrage; in fact some of them think they invented it in their Victimology Studies. Neither Muslim cultures nor leftist thinkers are known for their grasp of the longer view of history. Both appear to be so narrowly focused on their areas of expertise that they don’t have much room for secular conversation. That’s how it is with The Anointed.

Perhaps some of you know that the Baron is a landscape artist. He painted for more than twenty years — every darn cedar tree within easy commuting distance (before returning to the world of work when his Boy needed tuition money). During those years, any attempt to have him apply for a government “grant” fell on deaf ears. Art either sold itself or it didn’t, but having government officials involved was sure to make it corrupt, crony-ridden and debased.

Turns out he was right. The picture of the Blessed Mother in the manure was proof of all the things he’d said about artists supported by tax money. And given the large amounts of money paid for Serrano’s “Piss Christ,” one hopes there is enough cash left for several years of serious therapy for the umm… ”creator” of this fascinating work. Watching the crucifix floating in pee, one has to wonder about this boy’s toilet training traumas. They must’ve been horrendous; his “work of art” sure is.

Hy Science also has a link to another cartoon. It is rather large, so instead of showing it, here’s the link instead. Be sure to scroll down the page and read the… the poem which accompanies the image.

Rather edgy and explosive, wouldn’t you say?