An email from K in New Mexico linked some images which will be of interest to Gates’ readers, fellow travelers, and lurkers-on.

The first is a photo shopped image from ¡No Pasaran! I won’t put it up since it’s very large. However, you will want to see it, and the text which follows the doctored image. Here is the start of his post:

Danish cartoonists are forcing the media to test its own limits, to ask itself what their values really are, if they’ll become aware of their own liberties, as ask themselves why they’re selling granny for a multicultural nickel.

Meanwhile back at the ranch, Natalie and Co. at Biased-BBC points out something repetitive inculcation into the buzz have taught me to not notice: while the Beeb refers readily to Mohammed as the “Prophet Mohammed,” I have never once outside of the religious service broadcasts (which disappeared with a smart sounding rationalization more than a decade ago) called Jesus “Lord Jesus Christ”.

No kidding. The journalists here can say “insurgents” until they turn purple with self-satisfaction at their objectivity, but the words “Jesus Lord Christ” on their tele-prompter would reduce them to aphasia.

Now the original painting used by ¡No Pasaran! actually resides here in the states. The Monty Whitley Gallery in Pennsylvania is offering it for sale. Here is a detail from the larger work: 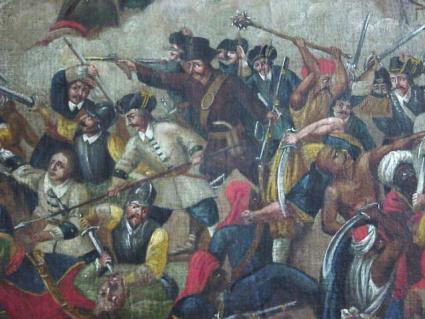 The intense battle scene depicts the final defeat of the Turks in 1683 at the gates of Vienna, Austria. The supreme commander of the allied army, General John Sobieski is depicted at the top of the scene directing his troops to victory. Overall size 28″x31″ in a gilt wood frame. Circa 1690. Very nice condition.

Notice the date of the painting. Less than a decade after the battle. For the times, that must have seemed to be like a current news briefing.

And notice that some of the Muslims are black, others appear almost other-worldly.

Darn. Wish I had $4,950.00. Unlike many of those old paintings, this one is a decent size: 28”x31” — not the usual dimensions you find in today’s mass-produced components for making canvasses.

If a person — oh, any old average kind of person — wanted to make a pilgrimage visit the painting, the gallery is in Pennsylvania. Hmmm…at the very least we could go look at it.

I remember standing for hours in line to see the van Gogh collection when it toured the U.S. years ago. And I remember the Baron drooling over v.g.’s lavish use of paint. Gobs of expensive tubes of oil paints had been lavished on his canvasses. But as the Baron reminded me wistfully, Vincent’s brother Theo (a much more successful person than either Vincent or his own 20th century namesake) had the wherewithal to supply Vincent’s paints and materials.

Ah, well. Should you decide you can’t live without this lovely gem, here’s the gallery information, much as it pains me to share it:

If you live nearby, consider a pilgrimage visit to study it in person.

What a piece of history. And priced less than some “collector” comic books…never mind, don’t get me started…

7 thoughts on “Allah At The Gates”