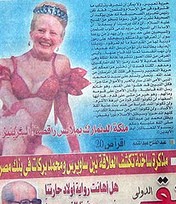 Here you have it, hot off the presses of the Egyptian newspaper Al Multaqa Al Dawly. Take that, you Danish ham-makers. We’ll show you how clever our humor is. Make light of Mohammed, will you? Well, your monarch is a belly dancer, so there. And if that doesn’t shame you, why we’ll quit importing your food and start making our own for a change. Which we might be able to manage if we could find a goat — besides Denmark, that is. Obviously someone has to be the goat. Your turn, Queenie!

Or, as The Sandmonkey put it:

You know, in terms of retaliatory humor, we-muslims and arabs- are way way behind. We are not imaginative in how we make fun of who makes fun of us. I mean, look at this picture of the Queen of Denmark. Oooh, Queen’s head on the body of a belly dancer, that’s funn…nahh…that’s lame. And if it’s supposed to be humiliating, it really isn’t, because the Danes make fun of their queen all the time, and sometimes in more graphic ways than this. And when they do put her head on someone else’s body, they make it look good and realistic. But then again, they probably use tools more advanced than scissors and glue.

The Danes will probably look at this and laugh, because, like, they have a sense of humor. No chips on their shoulders…

No chips yet, though there may be a few bits of shrapnel if the organizing troublemakers aren’t put out of business by the Middle Eastern governments who are permitting their embassy burns and flag stompings.

You have to wonder: in the lands of taqiyya and kitman, what is this show covering up? What is the real deal? The “Arab Street” doesn’t move about in frenzies of breaking and burning things without either orders to do so or permission to “channel their anger.”

7 thoughts on “All Is Fair in Love and War”