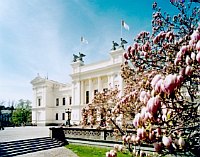 A couple of weeks ago a young man named Patrick emailed us wanting information about the town of Lund in Sweden, since he was considering attending the University there. I sought the advice of Scandinavian bloggers, and made a post out of it, The Color of Swedish Grass.

The issue was the proximity of Lund to Malmö, where there is a large Muslim population, and (according to some sources) a high incidence of rape and other crimes. There ensued a long argument in the comments, primarily between Anders, a Swede who lives in Malmö, and NoDhimmitude, who lived there for an extended period. NoDhimmitude is, however, Norwegian, and was at pains to emphasize that fact.

Each made an offer of help to Patrick in the comments, which I drew together into a follow-up post presenting their conflicting points of view.

As promised, I also emailed the same information to Patrick. Here is his reply:

We can be thankful that he was at least disabused of his notion of Sweden as a Utopia. And I’m certain that Scandinavia will be a relief to him, a calm haven after the stress of living here under the increasingly fascistic Bush regime.

But there’s one thing I don’t understand — how did Patrick ever conclude that Gates of Vienna, of all places, would provide a reliable answer to his question?

Life is full of mysteries.

4 thoughts on “Off to Sweden”