The Glittering Eye has a post up earlier this week on Mukhtar Mai’s latest slap-down by Pakistan. This one is a bit different since it happened at the UN:

Ms. Mai had long been scheduled to make an appearance called “An Interview With Mukhtar Mai: The Bravest Woman on Earth” in the United Nations television studios, sponsored by the office for nongovernmental organizations, the Virtue Foundation and the Asian-American Network Against Abuse of Human Rights. 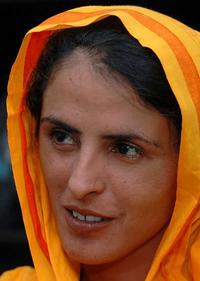 But on Thursday night the organizers were informed that the program would have to be postponed because of Pakistan’s objections.

Mukhtar Mai is an embarrassment to Pakistan. They fervently wish they could get rid of her, but they don’t dare. She’s too big, too much a symbol of courage in the face of impossible circumstances. She should be dead. She was supposed to be dead. But she not only lives, she flourishes.

Now Gateway Pundit reports on her latest efforts, using a quote from Pakistan’s The Age:

Wrapped in a shawl she embroidered herself and wearing traditional shalwar kameez, a baggy tunic and trousers, Ms Mai was jubilant as she anticipated the election of two housewives from her village of Meerwala to a district council.

“I hope these women will help resolve problems of all women. This can only be done if women are fully empowered,” said Ms Mai, who caused a storm of bad publicity for Pakistan and became an international symbol for women’s rights after speaking out over her gang rape ordeal three years ago.

The elections aim to give women a greater say by reserving them seats in representative bodies.

The first phase of elections for district councils was held on August 19, when 53 of the country’s 110 districts voted. The remaining districts will cast their ballots tomorrow [this was last week ed.].

Turnout was put around 50 per cent in the first round, but among women it was less, ranging from 43 per cent in populous Punjab province to 16 per cent in North-West Frontier Province, where there have been allegations that women were barred from casting their ballots in some constituencies.

”Allegations,” huh? I’ll bet they were threatened with being accused of bringing shame on their families. If there is one thing Ms. Mai has taught the West it is what consequences follow from shaming the family.

Interestingly, in many stories of her treatment by the village council, it is reported that she was raped because of her younger brother’s behavior in being with a young woman without a chaperone. In reality, her younger brother was raped by several members of a prominent family in the village. When asked if he planned to tell his family, he replied that he would. As a consequence, he was placed in a room with a girl from this clan and the police were called. He was then arrested and Muktar Mai’s fate was sealed. Or so they thought.

There is hope, however. The movement to free women is growing. We Can End Violence Against All Women , known as “WE CAN” is a regionally organized campaign. Its Pakistan location reports that the interior minister admits to 2,774 deaths of women in the previous five years due to honor killings. Common sense tells you that the figure is much higher, since many human rights groups claim that at least eighty per cent of Pakistani women are abused. It would be a toss-up between Pakistan and Palestine as to which place is more bestial toward women and children. They both suffer badly from a hair-trigger reactivity when it comes to their putative “honor.”

Any culture or country that so despises half their population and so routinely bestializes its young is a doomed project. It just takes awhile.