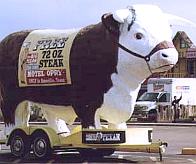 What’s wrong with this picture?

If you’re a Christian or an atheist, nothing.

If you’re a Jew, unless you see it as a version of the golden calf and the restaurant patrons as worshippers, nothing.

If you’re a Muslim, and you’re one of the strict no-graven-images types who believes that all representative art is offensive to Allah, then you wouldn’t like it. Otherwise it would be fine.

If you’re a Hindu, though, since it’s a representation of the earthly form of your primary deity, you might well find it sacrilegious and offensive.

So devout Hindus in New Delhi are rioting to demand that the offending statue be removed, right? And hasn’t the restaurant owner received a death threat because of his blasphemy?

No? I wonder why not…

Here in the ultra-tolerant heart of Western Civilization, no other religion demands so much special treatment. Nor does any other garner such fawning capitulation. In Britain the piggy banks must go. In Norway women must take into account the cultural characteristics of Muslim men, or risk rape. Muslims even want banks to issue interest-free loans, since the Koran bans usury.

For a counterpoint to all this, look at Christianity. Forget inadvertent offense: the examples of deliberate, calculated, and extreme attempts to offend Christians are legion within the popular culture. Even so, no Baptists are strapping on bomb belts and blowing themselves up in the Museum of Modern Art.

Not long ago, on my way towards the meat counter in a grocery store I passed a Hindu couple pushing their shopping cart up along the aisle. When I got to the beef section I noticed a little display sign showing a smiling cartoon cow holding up a steak on a platter and licking her chops in autophagous anticipation.

Surely, I thought, the Hindu couple must have found this display repugnant. The rows of raw red beef in packages might well have deeply disturbed their religious sensibilities. Yet there they were, calmly shopping!

No one was picketing the store. I didn’t have to pass through a metal detector to get in. Nobody firebombed the place the next day. No Hindu suicide bomber blew up the regional Food Lion headquarters.

Britain has its share of Hindus. If they are demanding an end to cow iconography, I haven’t heard about it. They’re not writing angry letters to Borough Councils demanding the removal of the “Cock and Bull” pub signs. If they mind the little cow pitchers that dispense milk in the tea rooms, they’re not making a loud noise about it.

Why is that? They’re just as much aliens in Britain as their Muslim counterparts. Until very recently they were indiscriminately designated “wogs” by the uncouth, along with their Pakistani neighbors. They’re just as entitled to politically correct redress of their grievances.

I’d like to be very politically incorrect and assert that Hindus are more civilized.

There. I said it, and the sky didn’t fall.

Leaving aside for the moment why Hindus (and adherents of other religions) are less belligerent than Muslims, there still remains this question: Why do modern Western societies cave in so easily to Muslim demands, capitulating and appeasing at every opportunity?

Of all the major religions, only Islam is enjoined by its scripture to have a hair-trigger for violence. Add to that the traditional shame/honor tribal culture and you have a volatile and lethal mix.

And we in the West are so allergic to violence that the merest whiff of it sends us scurrying to the ethnic grievances dictionary to look up the “root causes.” Find the solution, apply the anodyne, build yet another ethnic outreach cultural center, designate a new Muslim school holiday, and then…

And then what? And then the Muslims won’t be mad at us any more?

Or will capitulating to their violent threats only lead to demands for more concessions, and then more again? Until at last the Caliphate is established and Shariah instituted and the Ummah becomes coterminous with the entire planet…

Pigs and cows. All animals are equal, but some are more equal than others.