In November 1923, Adolf Hitler entered a beer hall in Munich and fired a pistol into the ceiling. He announced that he was about to overthrow the Bavarian state government and install himself and the National Socialist German Workers’ Party as the new revolutionary government of Bavaria. 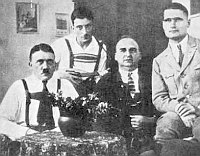 With that, he and his fellow Nazis — along with the renowned hero of the Great War, General Ludendorff — marched towards the government offices in what became known as the “Beer Hall Putsch.” Unfortunately for the Nazis, they were met by the police, who ordered them to halt and then fired into the crowd, leaving more than a dozen Nazis dead.

This debacle turned out to be the event that launched Hitler’s career: the putsch made him into a household name across Germany. After a well-publicized trial he was sentenced to five years in prison, of which he served but nine months. During his incarceration Hitler was allowed not only pencil and paper, but also the secretarial services of his loyal follower Rudolf Hess.

Hitler spent his time dictating to Hess the infamous Mein Kampf, a rambling memoir and political diatribe that touched all the bases which eventually became so familiar to Germany and the rest of the world. His genocidal goals were not hidden; they were all laid out in Mein Kampf for anyone to see.

Fifteen years later in 1938, when the senior statesmen of Europe were negotiating away large chunks of territory from other people’s countries and giving them to Germany, they were acting on the assumption that Herr Hitler did not mean what he said back in 1925; that those were simply the somewhat intemperate writings of a man who was otherwise a politician just like they were; that once his demands for the return of the Volk to the Reich were met, Der Führer would be satisfied and the world (except for some unfortunate Jews, gypsies, and so on) could once again live in peace.

But Hitler’s agenda was clear, and it was all laid out in his book:

If only the politicians of Europe had taken him seriously in 1933 or 1935 or 1938, before the Wehrmacht rolled into Poland. A quick peek into a translation of Mein Kampf would have left them with no doubt about what was coming.

Now fast-forward eighty years. Watch Kristallnacht, D-Day, Auschwitz, the Berlin Wall, Vietnam, and 9-11 fly by in a blur. Hit “play” as soon as you see the face of Iran’s president, Mahmoud Ahmadinejad, making his infamous speech this past October:

It is as if the President of Iran were eerily channeling the Reichskanzler of the 1930s.

President Ahmadinejad elaborated on the same topic when he denied the existence of Herr Hitler’s most notorious accomplishment:

To underscore the messianic nature of his mission, Mr. Ahmadinejad revealed during an interview that, when he was giving his recent speech at the UN, a halo appeared behind his head for half an hour or so. Not only that, the members of the audience who were watching were unable to blink during that time!

Yes, we’ve got a Hitlerian fruitcake here, but he’s a fruitcake who’s about to go nuclear on us. Hitler, after all, never managed to get that far.

Mr. Ahmadinejad has no doubt of his mission; he has made that mission blindingly clear on numerous occasions. He is here to prepare the way for the appearance of the Twelfth Imam, which will usher in the Islamic version of the Apocalypse.

The parallels with Hitler are uncanny:

But this time the six million are determined not to go quietly. After the Holocaust, the Jews will never again go quietly.

The 21st century’s version of Der Führer is ready to incinerate the Jews in their homes, but Israel is resolved: this shall not come to pass. Unfortunately for the Jews, and for all of us, the dénouement of this sordid drama is imminent.

As a final note, consider the following:

Who do you think said that? I’ll give you two guesses.

Note: The “Beer Hall Putsch” photo at the top shows Hitler, Ernst Röhm (second from the right), and Rudolf Hess (far right). The fourth man (second from the left) I haven’t been able to identify; Göring, Strasser, Streicher, Frick, Eckart, and Rosenberg have all been ruled out. Knowledgeable readers are invited to fill in the missing name.

Update: Commenter Charlie Eklund has identified the mystery man in the putsch photo as Hermann Kriebel. I’ll have to take his word for it, because the only other photo of him I can find is here (fourth from the left, in the pickelhaube), and the resolution is not good enough to confirm the likeness. But it could be the same guy…

Update 2: El Jefe’s post about the mullahs, which he was too bashful to link, is here.

Update 3: Ah, the distributed intelligence of the internet!

Also, reader CW writes, “According to The Hidden Hitler by Lothar Machtan, the man behind Hitler’s left shoulder is Emil Maurice.”

They’re quite right. I found another version of the same photo, and, even though it’s in Hungarian, you can see the list of names identifying people in the photo.

Hermann Kriebel is the guy I thought was Röhm (he still looks like Röhm to me!). Also see this page identifying Emil Maurice as Hitler’s “secretary.” It’s definitely the same guy.

Update 4: Welcome, Corner readers! Take your time and look around; you might be interested in the Jamaat ul-Fuqra material – look at the left sidebar near the top for links.

Update 5: Reader JS writes, “Your updated attribution is correct. There’s a better picture (including a fifth man, another early gangster crony, I think, Christian Weber) in my Folio Books edition of Shirer.”

The Hungarian site includes the fifth man, and identifies him as “Friedrich Weber.” So it looks like JS knows what he’s talking about.