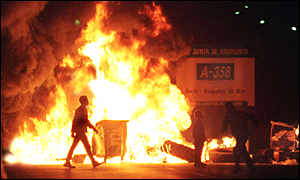 This week marks the first anniversary of Theo van Gogh’s ritual slaughter for his sins against one immigrant community of Islam. He died the week after his film, Submission was shown on national television. The message behind the film — images of a woman’s body painted with verses from the Koran — was obvious: Islam uses women, often in cruel ways.

No doubt Mr van Gogh’s film was clever, edgy, graphically compellling. But here, a year later, you have to wonder: what in the world was he thinking? Or was he thinking at all? Did he, as so many “celebrities” do, think his fame insulated him from danger? He actually laughed once when a Muslim man warned van Gogh that he was going too far.

This anniversary recalls the original mixed feelings that emerged with the details of his slaughter. He is purported to have asked his killer if they could “talk about this.” Or words to that effect. If true, what stellar ignorance drove Mr. van Gogh’s political/artistic work? How could he have failed to see how useless talk is? Was he blind to the rage “Submission” invoked? Was this hubris or simply a person willfully ignorant of the times in which he lived?

So many questions. Such a babble of thunderous silence.

Now, a year later, Europe is marking this anniversary with continent-wide eruptions. The rising tide of anger between blacks and Pakistani in the underclass in Britain, France’s nights of vandalism and destruction, the ever-increasing demands of the ever-increasingly sensitive immigrant Muslims who cannot tolerate even the public images of pigs, Spain’s race riots and the deaths at the fence it erected to keep out illegals. Exclusion and suspicion on one side; grievance-driven demands for entitlements on the other. And both sides trapped in the conflagration caused when truth — which whispers in private — dare not speak in the public square.

And now…even now, the Netherlands proves how little it has learned.

Such a small blip on the radar — just one man and two women. What can be the harm “as long as no one is hurt by their behavior”? Right?

It doesn’t seem as though it’s been a year since Theo van Gogh’s slaughter. His death is such a benchmark, such a defining moment that it has quickly entered a timeless place. Senseless murder —its waste and horror— often does. This crime should never have happened. In the best of all possible worlds he should have been free to express his contempt. But he lived in a very dangerous world — it seethed all around him — and he hadn’t the eyes to see it.

We will never know from what well he drew his willful refusal. What should his epitaph have been? Perhaps it might read “But I Wasn’t Serious”? Unfortunately, Islamist utopians are very serious indeed. Dead serious. As his murderer proved at the trial, with his contempt and vicious hatred for his victim and the family.

Peter Drucker said that “communication is the act of the recepient.” If he’s right — and I do think he is — then each time we want to talk, negotiate, or otherwise dither with a culture that holds us in contempt, we are doing nothing but shoveling out one more spadeful of our own grave.

Has Europe learned yet how truly lethal politically correct multiculturalism is? Have we? More than a year ago, Theodore Dalrymple told us why it won’t work:

As he says further, any good cook knows this is a recipe for disaster. Some ingredients predominate and some should barely whisper their names. Otherwise you have a mess, one that can neither be eaten or metabolized. And he reminds us what happens to those who follow the dicta of the mandarins and the grievance-driven:

And mercy me, my hat tip re Theo van Gogh, which belongs to an early morning email from PeakTalk.

19 thoughts on “The Multi-Culti Death Trap”