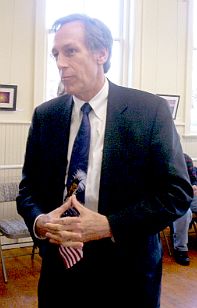 Gates of Vienna is fortunate in its Congressional Representative. In his newsletter this week, the Honorable Virgil Goode has announced his co-sponsorship of a bill designed to seriously halt the flood of immigration from Mexico that is wreaking havoc on our social services and cultural infrastructure.

He says what the citizens of this country already know: we must stop the flood of illegal immigration from Mexico into the United States. We must effectively seal our southern border and we must enforce our laws. The sovereignty of the US has become a joke; it will take strong measures to re-establish respect for our laws regarding citizenship and residency in our country. From New York to Colorado to Florida, the judicial system and immigration policy colludes in a “catch and release” program, even letting criminals go. This must cease. From the Goode Newsletter:

In other words, he and Congressman Hunter want a fence between the borders of Mexico and America.

But that’s just for starters. As he points out, this move is one that is backed by a majority of Americans. And while he doesn’t say so, you can bet it will be a big, gigantic issue in the 2006 elections:

In other words, we’re long past the time when we even know how many people have come across, or even where they’re all from.

Gates of Vienna has copied and formatted the information from Congressman Goode’s office about The TRUE Enforcement Act of 2005. It’s a comprehensive, tough piece of legislation. Those whose oxes are gored — e.g., localities who provide sanctuary laws will be financially penalized — are going to be screaming about this. But that is as it should be: this is a showdown between two views of what America is and is going to become. Here are some of the highlights, beginning with the opening section (note that the sponsors’ names are at the end of each item):

That is just the first sub-section of Title I. You can go to the whole document to read the others, which lay out effective methods for preventing visa abuses.

Moving down to Title II of TRUE, we find visa reforms with teeth. For Gates of Vienna, this is the heart of anti-terrorism reform because it calls other countries to account. As it stands, the US is either treated with contempt for its supposed hegemony, or sneered at for its lax and trusting attitude. That needs to change and this piece of legislation may begin to turn the tide:

This is a very comprehensive bill, with workplace enforcements and penalties for those who try to get around them.

Don’t forget that Mexico has made itself an adversary in this process. It is aggressively promoting Mexican illegal immigration and has set up public relations departments in its consulates to promote bi-lingual education for Mexican children who go to school here.

In the long run, Mexico wants its “territory” back — flooding us with immigrants and overwhelming our resources is only part of it. The remittances sent back to Mexico each year come to over sixteen billion dollars. No wonder we get no cooperation from Vincente Fox.

In the most recent edition of City Journal, Heather McDonald lays out the case against Mexico, and a damning one it is:

Remember that diplomats are nothing more than politicians squared. As Ms. Mc Donald says,

Eighty percent of Mexicans who come here are illegal aliens. The number may even be higher than that. The government of Mexico aids and abets its citizens in this disregard of our sovereignty by publishing pamphlets explaining how to get around the laws and how to stay away from the border guards. It also issues “consular cards” which are a form of ID which illegals can then use to get American drivers’ licenses, etc.

This Mexican onslaught amounts to usurpation and has become a clear and present danger to the borders themselves. Ms. McDonald quotes a poll conducted among Mexicans:

On the other hand, Mexico keeps a tight border on its side. The Mexican government is very particular about who may enter and who may stay:

It’s time for change regarding our immigration policies. Sadly, President Bush not only hasn’t led our country in this regard, he doesn’t even seem to be willing to follow good advice. Thus it is up to Congress to staunch the wound. Congressman Goode’s proposal of a fence on our border, and the TRUE Enforcement Act of 2005 are crucial to our sovereignty and our safety.

Think about it: 80% of Americans want enforcement at the borders while 80% of Mexicans think much of the territory in the Southwestern part of this country belongs to them. And their government is pushing them toward this view.

We may be in for a rough ride, but it’s a relief to know that Congress is willing to pick up the reins and get in the seat our President has vacated.