There are lots of stories out there today about Mukhtar Mai’s award from Glamour mag. Not only is she their woman of the year, but they’re backing it up with $20,00.00. Is that cool or what?? Pakistan is finally permitting her to leave the country to receive awards.

Our regular readers at Gates of Vienna probably know about my previous reports on her story — a stranger-than-fiction sojourn from obscurity in a blood feud in a rural village in Pakistan to world-wide fame. What a woman!

Mukhtar Mai is not a profile in courage. She is a full frontal assault on a cultural sink in a country so backward that at least eighty per cent of the women report being seriously abused. These are the men who dump acid in the faces of wives they tire of. Fifty cents’ outlay for a bottle of acid is sure cheaper than a divorce. And hey, if it takes her a few days to die, what’s the difference? Plenty more where she came from — and that includes any children who might accidentally get it in the face with her, since this sport is usually carried out while the wifey is sleeping.

There is a lot to her story, much of it ugly and degrading. But if you carry nothing else away about her ordeal, keep this fact in mind: her gang rape was the second one in her family and it only occurred because her little brother objected to the homosexual sodomy he endured at the hands (so to speak) of men from a powerful clan in their village. Had he kept his mouth shut after his ordeal, everything would have been okay. But when his attackers found out he was going to tell his family, they locked him in a room, stuck one of the young, unmarried girls of their clan in the room with him and then called the police. The officers arrived, surveyed the scene and arrested the boy for causing dishonor the reputation of this poor young girl by being in her company without a chaperone.

The fact that Islam’s rhetoric and Shar’ia law would have homosexuals stoned is not taken into account when older men sexually abuse young boys. These men are heterosexuals; the boy is merely a convenient, disposable vessel in a moment of pleasant distraction. Since they used him, they are not homosexuals. Had someone used them that might have been another story. A stoning story, perhaps.

So the boy had dishonored a girl from the Matori clan. Mukhtar Mai’s family must pay the blood price. When she found out that the tribal council was meeting in a field outside of the village, Mai ran there, hoping to intervene on her brother’s behalf. And so she did, but not in a way she had planned. When she arrived it was decided that the restoration of honor to the Matori clan could be accomplished then and there: the tribal council ruled that Mukhtar Mai would be gang-raped.

Five or six men were chosen and while they promptly administered justice, the villagers present celebrated the restoration of honor to the Matoris. When the rapists were finished, Mukhtar Mai was forced to walk naked back to the village while her neighbors laughed and jeered. Part way back, her father met her with a cloak and covered her for the remainder of the journey home.

Up to this point, there is nothing unusual in the story. There was only one action left to be taken: Mukhtar Mai was now supposed to die of shame. Literally. She was to kill herself, and in short order, please. A used, dishonored woman is worse than nothing: she is an insult to her family and to her village, an offense to be blotted out in order for balance to be restored.

Much has been made of her refusal to die, and of her courage in the face of the contempt and hatred that bombarded her for her stubborn decision to go on living. And much should be made of her struggle to transcend the shame, the doomed half-life in a darkened room.

However, we need to pay special attention to the other elements in her story — the ones beside her absolutely naked courage. As far as I can tell (and I’ve looked at her story carefully wherever I could find it) there are two other essential pieces of the mystery of her refusal to die. Mukhtar Mai admits herself that she wanted death more than anything. So what kept her going? It seems to have been two people: her father and her imam. Her father refused to see her as anything other than his beloved daughter. Her imam encouraged her to pursue her attackers in the courts.

And, so, backed by her family, Mukhtar Mai filed charges. So did her brother, for the sodomy he endured. His rapists were convicted in short order, though I don’t know if the boy — who was twelve when he was attacked — was ever cleared of his “crime” of being found in the room with the young woman. Mai’s ascension (or descent into hell) from court to court to court still hasn’t been fully resolved. The men who raped her have been imprisoned, they have been let go, some have been pardoned, others have been remanded once again. The Shar’ia Court wants all the men exonerated. The Supreme Court in Lahore claims it has jurisdiction. Or so it stood the last time I looked; things may have changed since then. 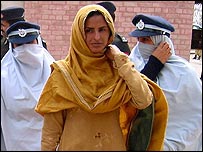 Mai has body guards. There have been pictures of hefty women guards in hijab, given the task of preventing her death. She will probably always live with some kind of protection, but even Pakistan has to admit that she has become too internationally famous to allow her to be killed.

Mai thinks living under guard is worth what has transpired in the interim: the schools she has built, including schools for boys, with all the money she has received, first from the Pakistani government for restitution, and then private donations, and a large award from the Canadian government. To Mai, boys must be educated if the old ways are to change. She has brought electricity to her village and her work has spread to other villages. She has become a symbol of hope to the women of Pakistan. They face a brutal day-to-day reality. Anyone who can show them directly that it can be overcome —even transcended — is worth her weight in gold.

Remember when you read the newspapers’ garbled reports that her “punishment” was for her twelve year old brother’s crime, that there was no crime. Her little brother was the victim not a perpetrator. Just remember that… and then wonder just how many of the other stories you read in the newspapers and magazines get the “little” details dead wrong.

They don’t call it the Legacy Media for nothing.