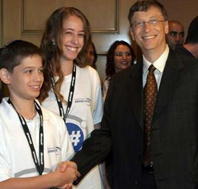 Okay, this time we have the pictures to prove it. Bill Gates is not a muslim. Or if he is, he sure is one sly guy.

Gates of Vienna’s sitemeter is often cluttered with searches for two things: “how make simple bomb at home” (or a variation thereof) and “Bill Gates muslim” (the latter mostly originating in the Middle East during the night). Once and for all, everyone, Bill Gates is still the same geeky agnostic he ever was. If money is heaven, then he resides there, halo on head.

Here’s our proof of Gates’ infidel-ity (sorry. Pun Attack). He was in Israel for a day, lavishing praise and shaking Zionist hands:

Well, there goes his chances for the seventy two raisins.

Meanwhile, we still do have your bomb recipe on file in the archives. Only it’s a bombe; no shrapnel but the sugar content could do you some haram.

3 thoughts on “Bill Gates and The Zionist Entity”