UDATE: James Lileks shares the sentiments of Gates of Vienna. In referring back to his appearance on the Hugh Hewitt show (transcribed here), Mr. Lileks says:

Over-reaction is the only way to get through to the stoned-deaf Senate. These people are from another moral universe. As Lileks says, they suffer from Senatitus. That’s short for being surrounded by the obsequious. Look for a more detailed description of this word on this coming Monday’s post on The Neighborhood of God.

We admit to being secretly pleased when the witty and intelligent among us come down on the same side of the issues as we do. It’s a warm and fuzzy imprimatur. 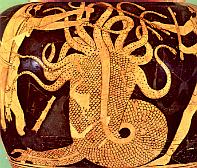 If you don’t think Congressional legislation is a hydra-headed monster, worthy of the labors of Herakles, perhaps this latest item will persuade you. Not that Gates of Vienna readers need much convincing.

The Denver Post reports that Rep. Tom Tancredo (R-CO) has filed a bill seeking to repeal an amendment to the Agricultural Appropriations FY2006.

What do you suppose the Hon. Tancredo wants repealed? Some restriction on food additives? Maybe he’s out to abolish farm subsidies?

Not at all, at all, dear readers. Rep. Tancredo wants to slice off one of the many heads growing out of this appropriations bill. And an ugly head it is indeed.

This particular amendment, SA 1803 to H.R. 2744, which passed by voice vote in late September, which was cleared by Homeland Security, and which was signed by your President, is the creation of Senator Robert Bennett (R-UT). SA 1803 to H.R. 2744 amends the Immigration and Nationality Act.

How’s that for hydra-headed? An agricultural appropriations bill grows a piece of tissue designed to protect illegal aliens by changing the laws on immigration. We’re talking about the Agriculture Department, not the Justice Department. We’re talking about the people who deal with the cows and the corn. What are they doing amending immigration laws?

Translated, the practical implications — and explications, for that matter — are these: At the behest of the Mormon Church in Utah, which serves to keep Sen. Bennett in office, Mormons (and any other religions so inclined) are now free to use illegal aliens as volunteer missionaries in this country.

On November 16th his office sent out the introduction of H. R. 4321, a bill to repeal Sen. Bennett’s rider to the fiscal appropriation for the Agriculture Department.

In other words, Sen. Bennett’s amendment might be intended to cover only missionary volunteers, but it could equally applied to terrorists under the cover of religion. It seems to us at Gates of Vienna that Sen. Bennett is either ignorant of the Law of Unintended Consequences, or he simply doesn’t care.

For what it’s worth, Sen. Bennett’s amendment had no co-sponsors. Rep. Tancredo, on the other hand, gathered fourteen co-sponsors to repeal the amendment

The co-sponsors so far are:

On November 15th, Rep. Tancredo’s bill was referred to the House Committee on the Judiciary, chaired by the Hon. F. James Sensenbrenner, Jr. (R-WI). To contact a particular member of the Committee, visit the linked page. Or, you may go to contact page to express your sentiments regarding this bill to repeal an amendment, made by a United States Senator, which undermines our sovereignty.

Whatever your opinion, remember to use temperate language. Vitriolic diatribes may be satisfying to write, but they leave no trace in the minds of the recipients.

If you’re not familiar with the legend of the Hydra, here’s a summary:

Rep. Tancredo and his band of co-sponsors — including our own Virgil Goode — find themselves of the unenviable position of Iolaos.

5 thoughts on “Another Invertebrate Attack”