Hamas is training women as jihadists. There have been interviews, blog posts, and lots of verbiage coming out of Gaza about this non-event radical move on the part of Hamas.

Waging jihad and lining up to die for what, exactly? These proud women martyrs get how many virgins when they hit the doors of Paradise? If it’s not being too nosy, what do they do with these virgins? I mean, we know what the jihadi men do with them. Lord knows, Mohammed described that in great, gory detail. But he didn’t make any provisions for women warriors, of course — he could hardly have predicted women with rocket-propelled grenades. Can’t think of everything, even if you are Mohammed. 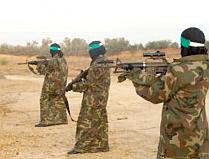 Now tell me, how are these intrepid warriors going to run in those skirts? It would be funny if it weren’t so ham-handed and pathetic. Women can’t even leave the house without a chaperone and now they’re going to be given weapons in order to annihilate Israelis? Beware the laws of unintended consequences, fellows. So you use the women to get rid of the Zionist Entity. And then what do you do with all those armed women? Heh.

The putative leader of the women’s martyr brigade is Rasha Rantisi, the widow (since April, 2004 when her husband was the target of an Israeli assassination) of Abdelaziz Rantisi, former head of Hamas in Palestine. He was preceded in death by Sheikh Ahmed Yassin, also a former head of Hamas and subject of a targeted assassination. Being the head of Hamas in Palestine is a life-long position, if you don’t examine too closely how lengthy you expect such a life to be.

Mrs. Rantisi is a figurehead, not a fighter. Actually, she’s running in the parliamentary elections planned for next January so she’s pretty much an armchair general by now. Not that she’s unwilling to talk about the glories of fighting to exterminate Israel:

Who is going to tell them that they’ve re-invented the wheel with this move? Israeli women have been doing military duty since 1948. And they look like they mean business.

What is it about Islam that it only seems to be able to assimilate modernity part way? It’s as though they have the language but not the idiom, the music but not the rhythm.

This may be a whole cultural example of “born too late.” Or, as an American general so succinctly put it recently in another context, these folks may be stuck on stupid. In fact, they may be glued to it permanently.